Centre will include a distribution centre style demonstration area

January 9, 2020
by Inside Logistics Online Staff

January 9, 2020
by Inside Logistics Online Staff 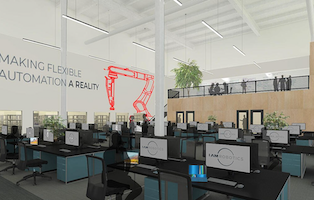 The designer’s rendering of the IAM Robotics’s new space.

PITTSBURGH – IAM Robotics is opening a new headquarters and showcase innovation centre. The new 30,000 square foot facility will be located in the emerging high tech area of Pittsburgh known as Robotics Row, a stretch of land that has become a hotbed for robotics and technology companies along the Allegheny River.

“We chose to be in Robotics Row because of its central Pittsburgh location, the ability to showcase our solution, the proximity to Carnegie Mellon University’s National Robotics Engineering Center, and all of the numerous amenities in Pittsburgh’s Strip District and Historical Lawrenceville neighborhoods,” said IAM Robotics founder, Tom Galluzzo.

“This new location is going to allow us to dramatically ramp up our production capacity and development testing for new technologies. We’re embracing our solution by operating our robots at the same scale as our customers and showing a better way to fulfill orders with autonomous robots.”

IAM Robotics is designing the new showcase innovation centre and headquarters now and plans to occupy it in the early 2020s.