By 2025 more than 150,000 mobile robots will be deployed in bricks and mortar establishments

December 31, 2019
by Inside Logistics Online Staff

December 31, 2019
by Inside Logistics Online Staff 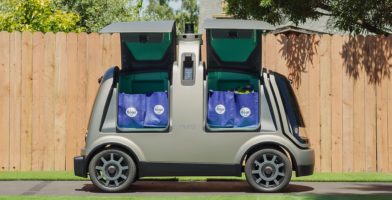 The Kroger test will use Nuro driverless vehicles. (Photo: Nuro.ai)

Several robotics companies have grown their autonomous mobile robot fleet in 2019 and are poised to scale exponentially over the next five years. Retail is an industry tied to a significant portion of this vast growth, as automation and efficiency remain key drivers for meeting today’s consumer demands.

“The value proposition for mobile robots in intralogistics is a familiar one: labour costs are too high, and production efficiency is too low. Deploying commercial robots eliminates concerns around driver cost and safety and can facilitate waste reduction. However, mobile robots in the retail market can also add value in other ways,” says Rian Whitton, senior robotics analyst at ABI Research.

With robots that can handle floor cleaning, data-collecting systems for inventory, automated tugs for material handling in the back room and on the shop floor, and even security, this ecosystem is rapidly growing. There is room for growth in the indoor-to-outdoor space, with the existing potential to link brick-and-mortar stores with last-mile delivery, and companies are looking for ways to bridge the current gap.

Amazon Mobile Robotics, formerly Canvas Technology, has touted this as a competitive advantage based on its vision-based navigation. Technology developer Humatics has also focused on facilitating seamless navigation from indoor to outdoor environments through ultra-wide band beacons that allow for localization accuracy down to millimeters, with robotics startups MIR and Vecna being notable partners.

“Big retailers have demonstrated their ability to scale their robotic products much more easily than other markets. For example, Kroger has developed a partnership with pioneering last-mile delivery company Nuro and Walmart is leading the industry in technology development, albeit under the radar. As they look to keep an aggressive pace in last-mile delivery, Walmart has also filed more drone patents than even Amazon,” Whitton points out.

Walmart’s most high-profile partnership to date is with robotics startup Bossa Nova. So far in 2019, they have deployed 350 systems for inventory management across Walmart stores, with roughly one robot for each store.

Other developers targeting the space include Badger Technologies and Simbe Robotics, another startup on the rise.

Robots in retail are a fast-rising market, but challenges to deployment remain prevalent. “Despite Bossa Nova forecasting mobile robot shipments to double each year for the next half-decade, the 10 terabytes of data it collects daily is too cumbersome for working with a cloud service provider, and so there is a reliance on chipset makers like Nvidia, Qualcomm and Intel to develop superior processors for increased edge computing needs. Retail companies, unable to implement the technology for large-scale deployment in-house, will need to also rely heavily on system integrators to expand their fleet size,” says Whitton.

Customer demand for accuracy and speed of delivery continues to provide retailers with a sense of urgency around robots and automation. “Retailers looking to compete with e-commerce providers face an uphill battle without an omnichannel approach that utilizes a multitude of channels for last-mile delivery and overall customer satisfaction. Partnering with companies like Simbe and Bossa Nova, who specialize in data that optimizes inventory management, can extend retailers’ own value proposition to the end-user,” concludes Whitton.