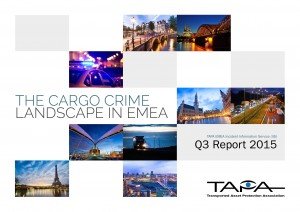 Manufacturers that care about supply chain security have a vital role to play in tackling the growing threat of cargo crime, according to the Transported Asset Protection Association (TAPA), after its latest figures for Q3 2015 show a further 10.6 percent year-year rise in incidents in the Europe, Middle East and Africa (EMEA) region.

The Association’s Incident Information Service (IIS) recorded 238 cargo crime incidents in the three months to 30 September 2015, including one loss of €1.4 million of postage stamps following a theft from a warehouse in Ile-de-France near Paris, and the theft of €635,000 of cosmetics and fragrances from a truck parked overnight in Rugby, UK.

Only 18 percent of the 238 new cargo crimes reported a value but the total loss for these incidents alone was €4,310,075. This includes 10 major crimes with a loss value in excess of €100,000. Three of these highest value crimes occurred in the United Kingdom, two took place in France and thefts were also recorded in Belgium, Italy, Kenya, Netherlands and Norway.

The Netherlands was the country with the highest number of cargo crime incidents in the three months with 105 and the United Kingdom was next with 53. This partly reflects the proactive approach of Dutch and UK law enforcement agencies in capturing and sharing data related to cargo crime.

The vast majority of cargo losses involve high value, theft attractive products moving on trucks. 46.3 percent of incidents involved Theft from Vehicle, 13.5 percent were Theft of Vehicle and 9.3 percent were recorded as Theft of Trailer. TAPA EMEA’s IIS also captured intelligence on losses as a result of Truck Theft, Theft from Trailer, Clandestine, and Hijacking.

Trucks stopped an unsecured parking locations continued to be at the greatest risk of attack by cargo thieves, according to the Q3 2015 data. 52.1 percent of 124 cargo thefts were reported as taking place at such locations, usually at lay-bys close to major roads and on industrial estates.

In September, TAPA launched a global Certification Campaign to get more logistics service providers and transport companies to adopt its Facility Security Requirements (FSR) and Trucking Security Requirements (TSR). This includes the introduction of a new entry-level and training that enables companies to self-certify to TAPA’s FSR Level ‘C’ and TSR Level ‘3’ to make warehouse and trucking operations more secure and compliant with TAPA’s industry standards.

Thorsten Neumann, Chairman of TAPA EMEA, said: “These latest figures reveal the continuing rise in cargo crime but they still only give part of the picture. Incidents all over the world are massively under-reported for a number of reasons. Often it is because law enforcement agencies only record everything as vehicle or property crime and do not categorize actual cargo crime. We also know some companies are reluctant to admit they have been a victim of crime, even though they can report it to our IIS anonymously.

“The fact remains that cargo crime isn’t a problem for anyone until they become a victim and then it becomes an extremely costly and damaging issue. Aside from financial losses, it harms relationships between customers and suppliers and impacts the reputations of companies, which ultimately affects business retention for transport and logistics companies. Our message is simple. Don’t wait to become a victim, do everything you can to make your supply chains as resilient as possible.”