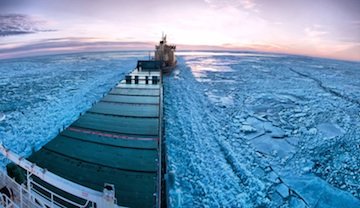 New research suggests that any type of significant oil spill in Canada’s western Arctic would likely spread quickly and foul oceans around Alaska and possibly as far west as Russia.

“Spills originating from the Canadian Beaufort and resulting coastal oiling could be an international issue,” says the report from RPS Applied Science Associates, a global environmental consultancy.

The research, funded by the World Wildlife Fund, comes as the National Energy Board prepares to consider blowout prevention plans in two separate proposals for offshore energy drilling.

“The need for this information is very urgent,” said David Miller, president of WWF Canada.

“The National Energy Board is considering these questions now. Decisions are being made.”

The consultants considered 22 different oil-spill scenarios in the Beaufort Sea, off the northwest coast of the Northwest Territories.

They included a fuel or oil spill from a tanker, a pipeline release and blowouts in shallow and deep water. The scenarios also varied the time of year, length and size of spill, as well as the type and timing of the cleanup.

Modelling was based on the latest data on ice, weather and ocean currents in the area. Estimates of probable spill sizes and effectiveness of cleanup measures were developed from information used by industry.

In the case of a blowout, it’s almost certain that oil would spread across international boundaries, the report says. There would be up to a 25 per cent chance of affecting Russia. That probability wouldn’t change much with cleanup involving chemical dispersants, although the size of the slick would be smaller.

Subsurface oil contamination from a blowout would also be highly likely to spread into Alaska.

A 2011 report commissioned by the energy board concluded that cleanup efforts after an offshore oil spill in the Arctic could be impossible at least one day in five because of bad weather or sea ice.

Although research on the effects of oil spills on Arctic wildlife is incomplete, Miller pointed out the waters studied are important habitat for marine wildlife such as beluga whales.

“The work shows that even with minor spills there’s a major impact,” he said. “There’s significant risk to nature in the Arctic from these spills.”

Area aboriginals, who helped design the study, have a compelling interest in the issue, said Frank Pokiak of the Inivialuit Game Council.

“We’re interested in seeing what direction the oil goes,” he said.

Inuvialuit depend on seals, whales and fish from the waters that would be affected.

“If there’s an oil spill, it’s going to be devastating for us,” Pokiak said.

The energy board is considering proposals from Imperial Oil and Chevron Canada for offshore drilling in the Arctic.

Current rules require them to have a second drill rig nearby to promptly sink a pressure-relieving well in the case of a blowout, which would make capping it much easier. Both companies are seeking an exemption and proposing methods they say would be equally effective and much cheaper than bringing in a second rig.

The board has agreed to consider their alternatives.

Imperial is to make its plans known early this fall; Chevron will wait until next year. Neither company is considering any drilling until 2020.