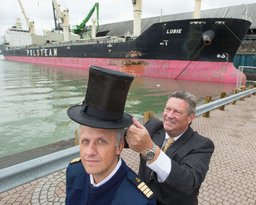 TORONTO, Ont.–The Toronto Port Authority (TPA) welcomed the first ocean vessel of 2014 (known as a ‘saltie’) to the Port of Toronto during the Beaver Hat Ceremony, an annual event and Port tradition dating back to 1861 to mark the commencement of the shipping season.

The arrival of M/V Lubie vessel was commemorated during the ceremony in which Ship Captain Jacek Kurpiel was “crowned” by Port of Toronto Harbour Master Angus Armstrong with a nearly 200-year-old silk and beaver top hat and presented with a commemorative briefcase and $100.

“We’re delighted to continue this 153-year-old tradition that officially heralds the opening of the Seaway and the beginning of a successful shipping season for the Port of Toronto,” said Angus Armstrong, Harbour Master, Port of Toronto. “As one of Canada’s largest major inland ports with links to road, rail and air transportation, the Port of Toronto continues to be a vital part of this City’s economic infrastructure.”

The M/V Lubie arrived on Monday, April 7 and carried 19,200 metric tonnes of raw sugar owned by CSC Sugar LLC. With a Polish crew helmed by Captain Kurpiel, the M/V Lubie’s trip from Coatzacoalos, Mexico took approximately 16 days to travel to the Redpath Sugar refinery in Toronto. The Bahamian-flagged vessel will remain in the Port of Toronto until April 10, 2014. The 29,694 metric tonne deadweight vessel is owned by Polsteam and used Navitrans Shipping Agencies as the ship’s agent for this voyage.

The antique top hat used in the Beaver Hat Ceremony originally belonged to Captain John Hooper Meade. He immigrated to Canada from England in 1828 and donated the hat made by Christy’s Hats of London to mark the arrival of the first saltie in 1861. Meade’s grandson, Captain John Allen, was Toronto’s Harbour Master from 1925 to 1930. The port tradition originally allowed for the Captain to keep the hat for 24 hours during their time in the City. This was changed after several humorous mishaps took place with the historic hat. The hat is now kept in the TPA archives for safekeeping and brought out once a year for the ceremony.