Canada aligns greenhouse gas and fuel efficiency policies with US 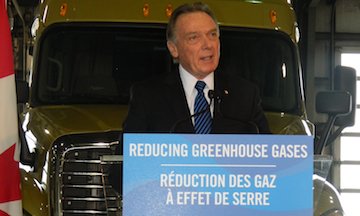 MISSISSAUGA, Ontario—Canada has quickened its step to keep in tight march with US transportation and environmental regulations.

Federal environment minister Peter Kent announced that Ottawa is aligning its fuel efficiency and greenhouse gas (GHG) emissions standards with those already set by the US government for new on-road heavy-duty vehicles and engines.

The new regulations will become increasing more stringent for vehicles and engines produced between 2014 and 2018. The tighter standards will apply to a wide range of vehicles from semi-trucks to full-size pick-ups, to garbage trucks and buses.

According to a statement issued by the government, the new limits “will remain in full effect for all subsequent model-year vehicles, which will be required to adhere to the 2018 standard, and will result in GHG reductions of 19.1 megatonnes over the lifetime of the 2014-2018 model-year vehicles”.

Kent believes this new measures will result in a savings for commercial operators.

“With these tough new measures, GHG emissions from 2018 model-year heavy-duty vehicles will be reduced by up to 23 per cent,” he said. “The regulations will also lead to improved fuel efficiency. For example, a semi-truck operator driving a 2018 model-year vehicle will save up to $8,000 per year in fuel.”

Kent said Canada will continue to follow the lead set by the Americans when it comes to these types of environmental regulations.

“Our government continues to align our measures with the United States,” said Kent. “Since 2005, Canada has reduced its overall GHG emissions by 6.5 percent.”