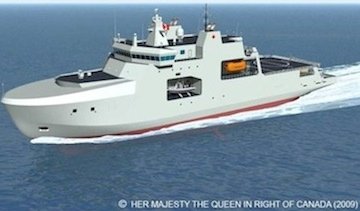 A patrol vessel such as the one pictured could help enforce future anti-pollution regulations in the seas of the high Arctic.

LONDON, UK—Canada is winning a rare bit of environmental praise from the international community for its stance on pollution from shipping in Arctic waters.

Documents obtained by the Canadian Press show Canada is pushing hard to outlaw the discharge of oily wastes or garbage anywhere in the North.

Canada’s proposal, during negotiations for a mandatory global shipping code in the Arctic, has won the support of several countries including Germany and France—whose citizens often criticize Canada over issues of climate change and management of wildlife such as seals and polar bears.

“Canada actually took quite good leadership on this issue,” said Lars Erik Mangset of the World Wildlife Fund, which was an official observer at the talks held late March in London.

Countries belonging to the International Maritime Organization have been working to thrash out a mandatory code of conduct for shipping in Arctic waters, as climate change makes the formerly ice-choked seas more accessible. The talks involve everything from the safety of sailors and construction standards for ships, to rules to protect the delicate Arctic environment.

Forecasts suggest Arctic shipping will continue to grow over the coming decades in both volume and type—everything from huge ore carriers to cruise ships carrying thousands of tourists.

Last September, an informal meeting in Washington of countries involved in the talks produced a document outlining minimum standards on environmental protection.

“It aims quite low,” said Mangset in an interview from Oslo, Norway.

In London, Canadian negotiators proposed much higher standards, based on Canadian legislation that has been in place since 1970. Those rules—similar to those in place for the Antarctic—forbid discharging oil, oily waste, or any kind of garbage into Canadian Arctic waters.

“The Canadian and Antarctic experience demonstrates that a zero discharge standard is practicable,” says the Canadian proposal.

“The Canadian experience also shows that it is not a significant barrier to cost-effective shipping, for purposes ranging from community supply to resource development and limited but growing through-traffic.”

Transport Canada, the department responsible for the negotiations, said the proposal is intended to ensure standards around the circumpolar world match those already in place in Canada.

“Canada continues to support the development of an international polar code that will provide an equivalent level of safety and environmental protection to our law,” said spokeswoman Kelly James.

Although Canada’s proposal was not formally tabled, it garnered enough support to make its way into recommendations that will now go meetings of the Marine Environment Protection Committee.

Those recommendations suggest dumping oil, oily waste or garbage into any part of the Arctic be against international law.

The next talks take place in May.

Although the polar code was supposed to be in place already, Mangset said the earliest talks could end is 2014, followed by an 18-month implementation period.

Shippers now operate in the Arctic under guidelines developed by the International Maritime Organization, as well as a welter of rules and benchmarks developed by other bodies.

The polar code, being negotiated under the auspices of the International Maritime Organization, is intended to bring all those issues under the same agreement.