System to be installed on 12 newbuilds, in advance of new regulations 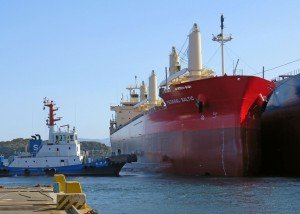 MONTREAL, Quebec—Fednav Limited, the largest Canadian operator of international ships in the Great Lakes-St. Lawrence Seaway system, today announced an order for 12 ballast water treatment systems to equip its ships currently under construction. This makes Fednav the first shipping company in Canada and the Great Lakes to announce the installation of ballast water treatment systems, well before the regulatory requirement.

Developed by JFE Engineering Corporation, Japan, the BallastAce system will be installed on Fednav’s new lakers and will be effective in both fresh and salt water. BallastAce operates through a sophisticated filter and sodium hypochlorite injection mechanism in the ship’s ballast system.

Fednav chose this solution after years of testing. From the Federal Yukon (copper ions) to the Federal Welland (electrodialytic disinfectant) to the Federal Venture (chlorination), the company has spent millions of dollars over many years to find a reliable, effective, and economical solution to the environmental problems caused by aquatic invasive species.

The contract with JFE commits Fednav to install BallastAce systems in its 12 lakers under construction at Oshima shipyard in Japan. JFE will install its first system in the Federal Biscay, delivering in October 2015. Consequently, Fednav may well be able to introduce BallastAce to the Great Lakes at the opening of the Saint Lawrence Seaway in 2016. With Fednav’s encouragement, AMS-approved BallastAce is now pursuing full US Coast Guard type approval for freshwater and saltwater certification at the GSI and MERC test facilities in Superior, WI, and Baltimore, MD.

The IMO’s Ballast Water Management Convention, of which Canada is a signatory, will most likely enter into force in 2016, the year the US Coast Guard and EPA require the installation of systems on ships trading in US waters.