Eco-friendly changes are good for the bottom line 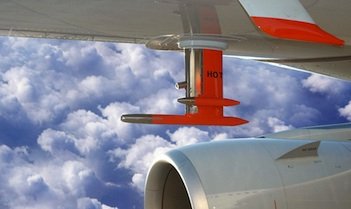 Sensors relay data about air quality and atmospheric conditions to the CARIBIC container in the cargo hold (Photo: Lufthansa)

Sustainable initiatives are often seen in one of two ways: as green-washing lip service or as demands that add red to the bottom line. But when the transportation industry makes changes that are good for the environment—especially ones that improve fuel efficiencies—cost-savings are usually the end result.

To read what the shipping industry is doing to become greener and more efficient click here.

Nils Haupt, director corporate communications for the Americas, with Lufthansa German Airlines, in East Meadow, New Jersey, finds it very easy to explain why the company and the industry in general take the idea of reducing the company’s environmental footprint very seriously.

“At an airline it all starts with fuel. At an airline you have lots of fuel consumption. Lufthansa is spending seven billion Euros a year in fuel, in dollars that’s $9 billion. Saving fuel is not only saving costs, because fuel makes up approximately 25 percent of your costs, it is also a burden for the environment. So bringing down fuel consumption is a key issue for airlines.”

Haupt says the easiest way to save on fuel costs is to purchase new aircraft designed with more energy-efficient engines and constructed with new lightweight materials. But buying new planes takes time and money. Lufthansa currently has 168 new planes on order, with a purchase price of 22 billion Euros, and the company expects to place a large order with either Boeing or Airbus for long-haul aircraft.

Beyond simply buying new aircraft, Haupt says Lufthansa is working on projects to develop and implement new procedures and technologies. The airline recently put a bio-fuel project into operation with two regularly scheduled flights—one in Germany and one between Germany and the US. Small patches of the sharkskin coating are applied to the aircraft for testing (Photo: Lufthansa)

It also worked with scientists and researchers to develop and test a new type of surface coating designed for application to the fuselage and wings. Known as sharkskin, the textured coating mimics the “riblets that cover the entire skin of fast-swimming sharks to reduce turbulent vortices and the drag they cause. This diminishes surface resistance when moving at speed.” Two Lufthansa Airbus A340-300s were outfitted with patches of the sharkskin for initial test flights this summer. Now, the results of the tests are being analyzed. Early expectations are a one percent reduction in fuel consumption and lower operating costs.

Another scientific experiment the company is involved in is the flying of an environmental recording and research device in its aircraft. The 1.5 tonne CARIBIC container (Civil Aircraft for the Regular Investigation of the Atmosphere Based on an Instrument Container) is flown on Lufthansa’s A340s and collects air samples and “data on aerosols and trace gases at cruising speed in the atmosphere through a sophisticated air and particle inlet system on the fuselage with the help of 20 different scientific instruments integrated inside the container.”

Haupt says Lufthansa is also working with suppliers to develop, test and install electro-taxiing (or e-taxiing) equipment on its planes. E-taxiing involves using quiet electric motors (thereby reducing noise pollution) to move the planes across runway tarmac, eliminating the need to run the main engines. The thought is this will save fuel and reduce air pollution.

On a more practical level, Lufthansa and its subsidiary Jettainer GmbH have developed a new, hard plastic, lightweight cargo container and the airline is replacing all of its aluminum cargo containers with the plastic models. Haupt says Lufthansa also insists that any cargo that gets moved by truck to its European hub be transported in vehicles equipped with Euro 5-compliant engines—a standard created to reduce air pollution. The CARIBIC container gets loaded into the plane. A look at the instruments inside the container. (Photos: Lufthansa)

While Haupt admits reducing costs and lowering fuel consumption is the driving force for many of these changes, he says the company is obligated to act for the greater good.

The trucking industry has undergone a number of changes over the past few years in order to make it greener, and not all of them have been voluntary.

“We’re the only sector from an air quality emission standpoint and a greenhouse gas standpoint that’s regulated. So in our industry, it’s not a choice of whether companies care about being environmentally friendly. They are regulated to be air-quality-sensitive and greenhouse-gas-sensitive,” says Stephen Laskowski, senior vice-president of the Toronto, Ontario-based Canadian Trucking Alliance.

Even with the government regulations, Laskowski says the trucking industry has the impetus to work toward sustainability.

He says that at the moment, the industry is relatively stable, at least when it comes to governments attempting to regulate engines and engine technology.

“From 2000 to 2010 we went through three phases of a regulation that dealt with our engines and fuels. Those regulations, the last phase, was finalized in 2010. I don’t expect any more changes in that area with regard to NOx and particulate matter and sulphur and fuel. We’ve reached what the EPA and Environment Canada call a near zero emission engine. In terms of major tweaks to those regulations, I don’t see them coming because we’ve reached the peak of the mountain with regards to air quality emissions, and particulates and nitrogen oxides.”

But that doesn’t mean the industry is done dealing with governments. Laskowski says another round of regulatory changes is set to begin next year, but he’s hoping this time the process will be easier.

“As it relates to greenhouse gas emissions, the first phase of the regulatory process begins in 2014 and proceeds over a four year period to 2018. In 2018, the US plans to introduce a second phase of greenhouse gas regulations for heavy trucks. One would expect Canada will go through that same process. What we expect in 2018 is a more rigorous standard for 2018 tractors and then in 2018 dealing with trailer design issues.”

According to Laskowski, during the engine regulation phase, the industry was forced to turn to new and unproven technologies in order to meet government-imposed targets. And that’s the last thing he wants to happen next time around. So he hopes the industry will be presented with workable solutions that come with a track record.

“We know the liquefied natural gas trucks work. We know it’s about a 20 to 30 percent GHG reduction compared to a similar, equivalent diesel engine. If we see more of these types of trucks penetrate the market through reduced costs and capital costs, and obviously some infrastructure improvements across North America, perhaps that means in 2018 our targets might be much more aggressive, but also much more attainable in the sense that we can use technology.”

An example of a boat-tail on the back of a trailer. (Photo: Scania)

He points out that while there may be a number of solutions available to help the industry meet whatever new targets governments set, it’s unlikely there will be a solution that will work in every circumstance. He said that boat-tail technology, aerodynamic devices that get mounted on the rear of a trailer and that typically cause a four- to 10-percent fuel savings, don’t work with flat deck or tank truck operations. Similarly with tires, he cautions that some of the more fuel efficient tires with less grip (and therefore less traction) that work in hot, dry southern states may not be suitable for use in Canada, where we have far more varied driving conditions, especially in the winter. Safety, he says, still needs to be a top priority when it comes to implementing new regulations.

One area where he says trucking companies are able to effect positive green changes is in the area of driver training and operations management. Teaching new drivers how to drive efficiently (such as making proper gear changes) or even moving to trucks with automatic transmissions, are options each firm needs to consider. Additionally, he says “there is a huge bunch of operational things that can be looked at, and we are looking at them. At the end of the day, our industry is hyper-competitive and competes on the management of cost structures.”