Salvage plans and spill prevention plans both in the works 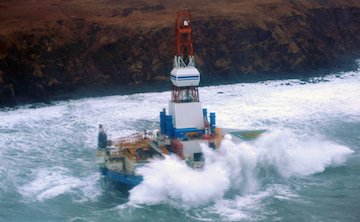 ANCHORAGE, Alaska—No leak has been seen from a Shell oil drilling ship that grounded off an Alaska island during a storm, officials said, as opponents criticized the growing race to explore the Arctic for energy resources.

“There is no sign of a release of any product,” Mehler told a news conference.

High seas and strong winds prevented crews from boarding the ship to check for any damage after the large vessel went aground off Sitkalidak Island, an uninhabited island in the Gulf of Alaska.

A US Coast Guard plane and a helicopter flew over the Kulluk on Tuesday.

A team of company, Coast Guard and local officials said they were mobilizing spill response equipment and preparing a plan in the event of a spill. The area is home to at least two endangered species, as well as harbour seals, salmon, and sea lions.

The ship grounded during a severe weekend storm while it was being towed to Seattle for maintenance. The storm eased Tuesday.

Mehler said a team of about 500 people was working on a salvage plan, “with many more coming.”

A Shell official said the drilling rig was built with a double-sided hull of reinforced steel that is 7.6cm (3in) thick. It recently had undergone $292 million in improvements before being put into service for a short time last year in the Beaufort Sea off Alaska’s north coast.

Congressman Ed Markey, the top Democrat on the Natural Resources Committee, expressed his concerns in a statement.

“Oil companies keep saying they can conquer the Arctic, but the Arctic keeps disagreeing with the oil companies,” Markey said. “Drilling expansion could prove disastrous for this sensitive environment.”

Sean Churchfield, operations manager for Shell Alaska, said an investigation will be conducted once the situation is under control. He did not know whether the findings would be made public.

The Coast Guard said it would be investigating and would make its findings public.