No oil by rail over the permafrost: Manitoba government

Objects to plan by Omnitrax to transport crude to Churchill 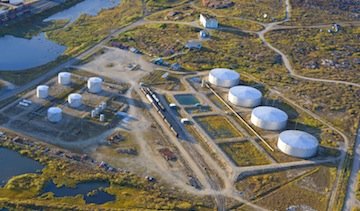 WINNIPEG, Manitoba—The Manitoba government says a rail company’s plans to start transporting oil across hundreds of kilometres of remote rail line built on permafrost is too risky to the environment and the safety of those who live in the north.

NDP Transportation Minister Steve Ashton said in light of the deadly train derailment in Lac Megantic, Quebec, earlier this year, Manitoba can’t support the shipment of crude oil through its fragile northern environment to the port in Churchill.

“Lac Megantic was a wake-up call for all Canadians,” Ashton told The Canadian Press. “If there were concerns before, there are 10 times the concerns now. We have to make sure there is not a precipitous move—by Omnitrax or anyone else—(toward) shipment in this area.”

Omnitrax Canada, the company that operates the only rail line up to Churchill, on Hudson Bay, was planning a trial shipment of crude oil next month. The company hopes to eventually transport millions of litres of light sweet crude oil a year up to the community where it can be loaded onto tankers.

While Omnitrax says the plan is safe and will help create much-needed jobs in the north, environmentalists and First Nations worry it will jeopardize the livelihoods of aboriginal communities and pose a huge risk to wildlife. Churchill, known as the “polar bear capital of the world,” is an eco-tourism destination for polar bear, beluga whale and bird watching.

The province has chipped in some money to help upgrade the rail line over the years and supports diversifying the shipments that go through Churchill, Ashton said. But Manitoba can’t support any plan to ship oil through Churchill without further upgrades and complete transparency regarding the cargo carried by the trains.

Figures from the Transportation Safety Board of Canada show there have been 63 accidents on the Hudson Bay rail line between 2003 and 2012. All but 10 were derailments.

“Our advice to Omnitrax would be, go back to the drawing board on this,” Ashton said.

Although the rail line runs through Manitoba, the track is under federal jurisdiction so Ashton said the province can do little to stop the shipment of oil. Transport Canada declined an interview request, but sent an emailed statement saying Omnitrax would be expected to comply with all federal regulations should it proceed with its plans.

Omnitrax president Merv Tweed, the former MP for the Brandon-Souris riding, said the idea of hauling oil by rail is new and it will take time for people to get used to the concept. The shipment of crude oil by rail is perfectly safe and the tracks don’t require any additional upgrade, Tweed said.

The company has been holding consultations in the north to try to quell public skepticism and ease concerns about the plan. A trial shipment of oil slated for next month is on hold while the company continues these consultations, Tweed said.

Omnitrax is determined to grow the port of Churchill while bringing jobs and prosperity to northern Manitoba, he added.

“We have to look at any and all ways of continuing to grow traffic through the port,” Tweed said. “The return on that is the fact that communities create jobs and opportunities … and young people get to stay where they want to live and enjoy a living.”

But First Nations, who still rely on the wilderness for their living, are concerned moving crude oil through their traditional territory will threaten their way of life.

Grand Chief Irvin Sinclair, with the Keewatin Tribal Council, said people still hunt and trap on the land. One derailment or spill is all it would take to destroy the livelihood of generations, Sinclair said.

“There goes the wildlife,” he said. “There goes a way of life for everybody if something drastic happens … It would be devastating to the environment.”