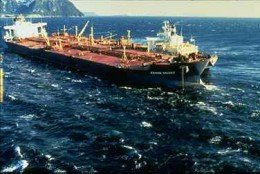 Shortly after leaving the Port of Valdez, the Exxon Valdez ran aground on Bligh Reef, causing a monumental environmental disaster in Alaska. (Photo: Office of Response and Restoration, National Ocean Service, National Oceanic and Atmospheric Administration).

Those changes include removing a $161-million cap on payouts from a national oil spill compensation fund and making the entire $400-million fund available to cover the costs of a marine spill.

“With these changes, Canada will have the most robust and comprehensive liability and compensation system for spills from ships anywhere in the world,” Transport Minister Lisa Raitt said in Saint John, NB, far from the eye of the oil tanker storm on the West Coast.

“We want to make sure that if there is a spill…that it is not the Canadian taxpayer, that it is the polluter who pays at the end of the day.”

The proposed changes failed to convert pipeline critics, who said the entire Canadian Ship-source Oil Pollution Fund wouldn’t scratch the surface in a worst-case scenario spill off the BC coast.

“That’s really not good enough,” said Art Sterritt, executive director of Coastal First Nations, a coalition of aboriginal communities along the north and central BC coast that opposes the pipelines.

The changes offer no comfort to those concerned about the increased tanker traffic that would result from Northern Gateway or Kinder Morgan’s proposed Trans Mountain pipeline through central BC to Port Metro Vancouver, he said.

The unlimited liability of the fund was one of 45 recommendations from an expert panel on tanker safety that reported last fall.

Raitt said up to $1.6 billion in total is available in compensation and to cover damages in the event of a spill through the ship owners’ insurance, the domestic fund, and the international Ship-source Oil Pollution Fund. Both are funded by levies on the shipping industry.

If all of those funds are exhausted, the federal government would pay compensation and then recover the money from industry, she said.

Sterritt said taxpayers could still be on the hook.

But BC Environment Minister Mary Polak called the changes a significant step toward the “world-class” marine safety regime that is one of five conditions of provincial support for any oil pipeline project.

“There’s a long way to go toward implementation but when you consider where we were at the beginning when we announced our five conditions, and where we are now—specifically with the federal government—we are feeling very pleased with the way in which they have worked toward our goals,” Polak said in Victoria.

The $6.5-billion Northern Gateway project proposed by Calgary-based Enbridge would transport about 525,000 barrels a day of diluted bitumen from the Alberta oil sands to the northern BC coast.

The $5.4-billion Trans Mountain expansion proposed by Texas-based Kinder Morgan would almost triple the current capacity to Port Metro Vancouver, from 300,000 barrels a day to almost 900,000.

The two pipelines would see more than 600 additional oil tankers a year plying the B.C. coast.

The pipelines would contribute an estimated US$131 billion to Canada’s gross domestic product between 2016 and 2030, according to a University of Calgary study.

Tuesday’s legislation is the latest in a long list of changes introduced by the federal government since the Northern Gateway project began to founder two years ago.

The proposals would also allow for the use of chemical dispersants—measures that drew immediate fire from project opponents.

Dispersants are meant to break down oil but Karen Wristen, executive director of the environmental group Living Oceans, said evidence is mounting that they are more toxic than the oil itself.

“The only benefit to dispersants is that they make it difficult to see an oil spill, by breaking it up and mixing it into the water column,” said Wristen. “For the oil polluters—and apparently, the government—it’s out of sight, out of mind.”

“It’s more of a cover-up than a clean-up because dispersant cleans up nothing,” he said.