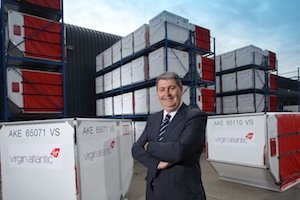 Neil Ferdinando with some of Virgin Atlantic Cargo's new containers

LONDON, UK—Virgin Atlantic Cargo has taken delivery of its first 802 lightweight air cargo containers and will add a further 250 new units in the coming weeks as part of its sustainability program to save fuel and reduce its carbon footprint.

The airline will ultimately replace all 3,200 of its LD3 units. The first phase of its new composite container fleet will enable Virgin Atlantic to achieve further fuel efficiencies and reduce its CO² emissions by an additional 565 tons in 2014.

Neil Ferdinando, Virgin Atlantic’s general manager cargo operations, said: “This is one of a wide range of sustainability initiatives across the entire airline and is closely linked to our brand values. We have been trialling lightweight containers over several months and with the first delivery we have replaced 25 percent of our LD3s with composite containers that are 16 kilos per unit lighter. This provides a dual benefit to the airline of improved fuel consumption and makes another valuable contribution towards our target of reducing aircraft CO² emissions by 30 percent by 2020.”

Fleet improvement is one of the airline’s main commitments to reducing emissions. The 10 Airbus A333 that joined Virgin Atlantic’s fleet in 2012 and its new Boeing 787-9s, which commence deliveries in the autumn of 2014, are both more efficient per trip than the aircraft they replace. As well as the introduction of new fuel management systems, Virgin Atlantic continues to work behind the scenes to make sustainable fuels a commercial reality, which could lead to their use as soon as 2015.