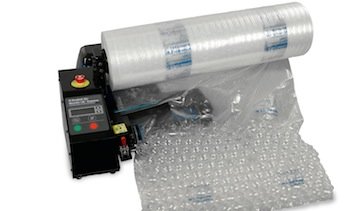 SADDLE BROOK, New Jersey—NewAir Anti-Static film from Sealed Air is an anti-static cushioning designed to prevent electronic products from being damaged by shock and electrostatic discharge.

The film works with the company’s NewAir IB Express inflatable cushioning system which dispenses the film in either 12-inch or 24-inch widths. As the film is delivered by the system—at speeds of up to 55 feet per minute—it is inflated to provide cushioning protection for the items being packed.

According to Sealed Air, the anti-static film meets US military specifications regarding electrostatic discharge, surface resistivity and creep performance.

The film can be used with any of the NewAir accessories including the Instasheeter cutting and converting system, the Roll Winder attachment and the JetStream overhead delivery system.