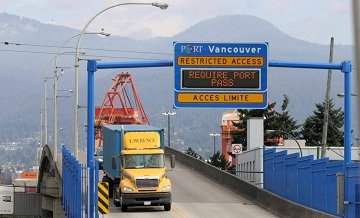 VANCOUVER, BC– A 14-point action plan has been collectively agreed upon by the port of Vancouver, the federal government and the province to return the port to normal operations.

This plan is intended to help ensure truck drivers are paid fair compensation. It also includes rapid implementation of pilot measures to help reduce wait times at container terminals, and the creation of an industry oversight committee.

The measures were developed after taking into account the concerns voiced by container truck owner/operators and unionized drivers and inputs received from all stakeholders, including recommendations made by federally appointed advisor Vince Ready.

The efficient movement of marine containers through Port Metro Vancouver is critical to Canada’s Asia Pacific Gateway and the national economy. The work stoppage of the last two weeks has resulted in severe impacts on the national economy, and with the immediate implementation of the 14-point action plan its proposers expect an immediate and full return to work by truck drivers.

As part of the plan, and to address industry instability and concerns about undercutting agreed rates, Port Metro Vancouver will restructure its Truck Licensing System. This comes after months of consultation with industry, trucking companies and federal and provincial governments, and has benefited from the work of Vince Ready and his discussions with truck operators. Port Metro Vancouver will consult with trucking industry stakeholders, with the intent to implement reforms by June 15, 2014.

“We are fully behind these changes and intend to put them in place quickly, in consultation with stakeholders in the trucking community,” said Robin Silvester, president and CEO, Port Metro Vancouver. “Our goal is to rapidly improve the truck licensing system to more effectively manage the trucking services marketplace, improve efficiencies and ensure there is effective compliance monitoring in place with respect to rates.”

The plan can be seen here.