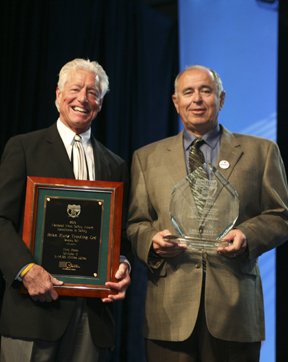 The fleets earned top honours in their respective categories while competing against Canadian and American trucking firms. Also receiving recognition were MacKinnon Transport of Guelph, Ont., which topped its division for carriers with total annual mileage of 15-24.99 million miles, and Groupe Robert of Boucherville, Que. which came in second place in the 50-99.99 million miles division.

The two grand prize winners were selected from among 18 division winners in the National Fleet Safety Division Awards announced in January. In order to be granted the prestigious grand prize, both companies had to demonstrate that they strive to meet stringent standards in their overall safety programs, on and off the highway, and were judged to be the best in their commitment to improving highway safety.

Both companies will be recognized a second time during TCA’s upcoming Safety and Security Division Annual Meeting, to be held May 15-17, at the Embassy Suites Murfreesboro Hotel and Conference Center in Murfreesboro, Tenn.