Conference Board of Canada takes comprehensive look at industry 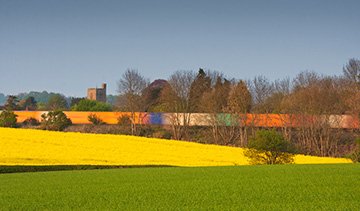 Rising demand for canola means the crop is becoming more valuable. That, in turn, means producers can afford to ship it by container. (Photo: Thinkstock)

OTTAWA, Ontario—Despite the maturity of Canada’s food supply chain and its well-developed infrastructure, the country’s retail and agricultural sectors still face a wide variety of challenges moving food products from their area of production to their final markets.

In the study Fast and Fresh: A Recipe for Canada’s Food Supply Chains, the Conference Board of Canada notes that changing technology and market conditions still have the potential to greatly alter the way food moves across the country and beyond Canada’s borders.

It noted that as the value of food products changes, the way they are handled is likely to change. It uses pulses as an example, pointing out that their value has skyrocketed as consumer demand has increased, and as a result the way they are shipped has changed.

“Pulse crops, such as dry beans and lentils, have trended toward containerization. As mentioned, shipping in containers reduces the amount of handling and is better suited for maintaining product integrity as a result. In addition, as with cold chain infrastructure, grain-handling infrastructure is often weak in developing countries. Containerizing grain products helps to overcome this weakness and opens up new market opportunities. Shippers are taking advantage of this now, by shipping containerized pulses to distant markets such as Indonesia and North Africa through the ports of Montreal and Halifax, which have invested into ‘tip and load’ facilities for containerized grain products.”

The report also pointed out a number of challenges in the Canadian food chain. Chief among them is the import/export container imbalance:

“Domestic container positioning poses another problem,” the report states. “Most import movements are destined for the large consumer markets in Vancouver, Calgary, Toronto and Montreal. However, exporters are located across the country where the consumer markets are not nearly as large. This creates an even greater imbalance (in the other direction) that causes difficulty and higher logistics costs. For example, in the Manitoba market, for every loaded import reefer container there is demand for up to 400 export reefer containers (the province is a large exporter of pork products in particular). Exporters effectively have to pay for the cost of exporting the product plus the cost of repositioning empty reefer containers from other parts of the country.”

Another problem it identifies is shipping frozen food by rail. Generally, the reduced costs associated with rail shipments—as opposed to truck—seem like they would provide an economic advantage to frozen food producers, but there can be costly bottlenecks in the system.

“Moving to rail has one disadvantage and that is the lack of siding for many facilities that receive the frozen or temperature-controlled goods, including transload facilities at the ports. If the sidings are not there, there has to be an additional handling (unload rail to truck, transfer to facility, unload truck etc).”

The study also points out that while lower transportation costs are generally a good thing for food producers, the study warns that if shipping prices drop too much, that could present a threat to the Canadian industry.

“Those improvements can threaten Canadian domestic exporters. This is because of the ability of lower transportation and logistics costs to act just as a relaxation of a trade barrier would—it generates the potential for greater competition in general. But identifying beforehand how much and where that new competition will come from is always difficult. Perhaps the best current example of this is the potential impact on trade flows of the Panama Canal expansion in 2014. While the expansion is expected to decrease shipping rates between Asia-Pacific countries and the East coast North American markets by giving them more direct ocean-shipping oceans, the extent to which this will actually occur is still unknown.”