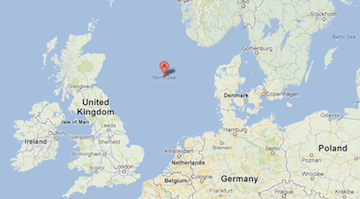 AMSTERDAM, Netherlands : Rescuers gave up hope of finding any more survivors from a cargo ship that sank in the frigid North Sea off the Dutch coast, saying Thursday they are searching for the bodies of six crewmen still missing. That brings the presumed death toll to 11.

High winds and rough seas hindered the search Wednesday night and it was called off shortly after 2:00AM. Search planes, helicopters and ships were heading to the area to resume the search today, but the icy conditions made survival virtually impossible.

“Given the water temperature and the amount of time that’s passed, we don’t have any hope for more survivors,” Peter Westenburg of the Dutch Coast Guard said. Four bodies were found Wednesday, and 13 survivors were rescued. A fifth body was found and retrieved Thursday by a Belgian government helicopter.

The 148m (485ft) Baltic Ace sank after colliding with the 134m (440ft) container ship Corvus J in darkness near busy shipping lanes some 65km (40mi) off the coast of the southern Netherlands. The cause of the collision is not known.

Hugo Kidston, a spokesman for Allianz, whose naval marine insurance arm is one of the largest in the industry, said that without being able to speculate on the specifics of this particular case, human errors are the most frequent cause of marine accidents.

Polish television cited a representative of Baltic Ace as saying an error may have caused the accident, but the report did not offer specifics.

The Dutch waterways agency said it has sent two vessels to the busy shipping lane to help guide traffic and to lay buoys around the area of the sunken wreck of the Baltic Ace. One is using sonar equipment to establish exactly how deep and where it lies on the seabed.

The agency said it is in contact with the ship’s owner about possible salvage operations.

The Baltic Ace, carrying a cargo of cars, sank quickly as its crew of 24 tried to abandon ship.

It was manned by a crew of Bulgarians, Poles, Ukrainians and Filipinos, but identities of victims, survivors and presumed victims have not been released. Four of the survivors were flown to a hospital in Rotterdam and seven to a military hospital in Belgium. All are expected to recover. The location of the other two survivors was unclear.

Janusz Wolosz, an official with Poland’s embassy in The Hague, said that two Polish crew members have been confirmed dead, three are missing and six crew, including the Polish captain, are recovering in hospital after being rescued.

“They were all well qualified for their jobs,” said Mariusz Lenckowski, of the agency that employed the Polish seamen. He said the Baltic Ace was built in the Gdynia shipyard in Poland in 2007.

The Baltic Ace, sailing under a Bahamas flag, was heading from the Belgian port of Zeebrugge to Kotka in Finland, and the Cyprus-registered Corvus J was on its way from Grangemouth in Scotland to Antwerp, Belgium. The Corvus J was badly damaged but not in danger of sinking. Its 12-man crew was unharmed and had assisted in the search Wednesday, but on today began heading toward Antwerp for repairs.

Sandra Groenendal of the Dutch Safety Board said responsibility for investigating the crash lies with the states under whose flags the ships were sailing—the Bahamas and Cyprus—because the collision happened outside Dutch territorial waters. However, she added it was possible those states would seek Dutch assistance.

The safety board later said in a statement it has offered its assistance in the investigation.

Dutch government data shows 260,000 ships cross through Dutch waters annually, mostly foreign ships. Due in part to the nearby location of Rotterdam, Europe’s largest port, it is one of the busiest shipping lanes in the world, yet fewer than 20 accidents happen annually, and few involve fatal injuries.

According to Zero-meridean.nl, a website that uses public information to track disasters and emergencies with links to the Netherlands, the last comparable fatal accident off Dutch waters was in 1994, when the English fishing ship Larissa collided with a Maltese-flagged tanker, killing all six on board the fishing boat.