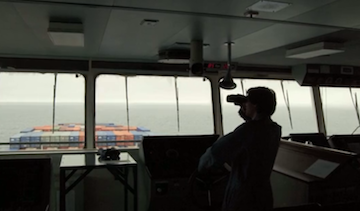 Martin Machado describes watch duties on the cargo ship as part of his video about life at sea.

SAN FRANCISCO, California—Like many artists, Martin Machado has a day job. He’s a sailor and a commercial fisherman, and his paintings reflect his love of the sea.

He has also worked as a merchant mariner on a 900ft cargo ship.

On his first voyage from New York, New York to San Francisco, California via he Suez Canal, Machado spent some free time painting his fellow crew mates and the ship itself, but he also took video of daily life on the vessel. When he got back to shore, he turned that video into a 22-minute short film entitled “Six Months At Sea In The Merchant Marine”.

The film charts the voyage of the ship, and the experiences of the people onboard. Machado describes the regular, daily routines of keeping watch and performing maintenance, and talks about some of the unexpected situations that cropped up, including a dangerous oil leak and being put into dry dock. He also describes the preparations taken to deal with pirates.

Machado addressed the psychological effects of living at sea for six months, and how he and the crew coped with the experience. He also highlights some of the stops and ports along the way.