No peace for the Peace Bridge 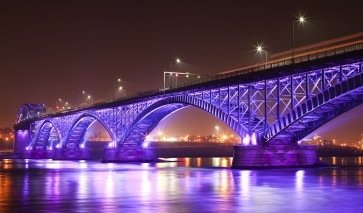 WASHINGTON, DC—In an era of supposedly harmonious cross-border co-operation between the US and Canada, the decidedly less-than-peaceful brawl between Canadian and American officials over the Peace Bridge is proving embarrassing for both federal governments.

A bilateral committee’s attempts to come up with a plan to modernize the heavily travelled border crossing between Buffalo, New York and Fort Erie, Ontario, have degenerated into bitter ouster attempts, name-calling and public spleen-venting by officials from both sides of the border.

During one heated meeting, a Canadian board member on the Peace Bridge Authority even branded an American female bridge official the New York governor’s “concubine”—apparently because he thought she was doing Andrew Cuomo’s bidding.

The general manager of the Canadian delegation, Ron Rienas, says Anthony Annunziata apologized personally to the woman and has since undergone sensitivity training following an internal review, but the Americans remain unhappy.

Startling details of the feud were splashed on the front page of the New York Times on Tuesday after local media spent months chronicling the escalating discord—and largely laying the blame on Cuomo’s famously strong-arm tactics.

“Somebody needs to tell the governor that his influence ends at the border—and that playing hardball doesn’t cut it in hockey country,” Donn Esmonde, a city council columnist at the Buffalo Daily News, wrote in weekend editorial.

“If the governor thinks he can impose his will on the bridge authority’s Canadian members, my guess is his fast-forwarding visions will soon be added to the scrap heap.”

Another recent column in the paper carried the headline: “The War of 1812, Part 2.”

In addition to expanding the plaza on the US side of the crossing, the Peace Bridge Authority is also trying to agree on a $92 million proposal to refurbish the bridge, a structure that’s long been held up as a symbol of the close friendship between the US and Canada.

They’re also working on a plan to start up a $25 million Customs pre-clearance pilot project for US-bound trucks on the Canadian side, a component of the much-ballyhooed Beyond the Border initiatives.

But the real fireworks have erupted over the plaza expansion. Canadian authority officials are concerned about spending far more for land than it’s worth, while the Americans accuse the Canadians of blocking, for two decades, attempts to develop the US side of the border.

“All the delays that they talk about, the 20 years of paralysis—the fact is that all of the work that has actually been done on the American side has been done despite constant roadblocks being thrown at us by US entities, including the state government, the city of Buffalo and the feds,” he said.

Indeed, Buffalo residents are currently fighting against some of the development proposals on the American side of the Peace Bridge because of concerns about increased traffic, noise and other pollution.

Rienas also pointed out that the authority has notched significant achievements at the Peace Bridge, including 100 million vehicle crossings, $1 trillion in trade and a new plaza in Fort Erie that features tollbooths relocated from the US side.

“What’s particularly frustrating for the Canadian board members, who are much more independent, is that the Americans are being told what do to by the governor’s office, and everything he says is revisionist history,” Rienas said.

There are also political concerns at play for Cuomo.

He campaigned in 2010 on a pledge to kickstart redevelopment plans for the Peace Bridge, but nine of the western New York districts voted against him. He’s up for re-election next year, meaning the clock is ticking on his bid to make good on his promise.

Cuomo’s top emissary on the Peace Bridge Authority, Sam Hoyt, has called for the ouster of Rienas, accusing him of blocking progress. The Canadians, meantime, are refusing to work with Hoyt, and are seeking his removal from the authority.

Cuomo, through his allies in the state legislature, has upped the ante, proposing a bill last week that would dissolve the authority outright. The binational agency has peacefully overseen the Peace Bridge for almost a century.

That drastic measure came after Cuomo sent a letter last month to Denis Lebel, Canada’s transport minister, urging him to pressure the five Canadians to quickly approve construction projects on the US side of the border.

Lebel’s office released a tepid statement Tuesday on the sordid state of affairs.

“The Peace Bridge supports the economies of both of our countries, and makes life better for residents of southern Ontario and western New York,” the statement read. “The Peace Bridge Authority, with its binational board of directors, has worked well for decades.”

There are scant signs the tempers are easing at the Peace Bridge despite attempts by senior officials on both sides of the border to tamp down the dispute. US senator Chuck Schumer, a New York Democrat, was in Buffalo last week and urged both sides to stand down.

“At the edge of making progress, this dispute erupts,” he said.

“My plea to both sides is: Co-operate. If everyone’s pointing fingers, we’ll have another 10 years before we get a Peace Bridge.”

But when the authority reconvened for the first time in months on Friday, they bickered over the minutes from a previous meeting.

At a news conference following the meeting, Canadians were still smarting from Cuomo’s recent public characterization of the bridge as a “metaphor for dysfunction.”

“I still think there’s a lot of tension,” said Annunziata, the authority chairman. “I think things have to change … there needs to be some changes if we’re going to have some progress.”

He added that the Customs pre-clearance pilot project, in particular, was at risk due to the feud.

A new American on the authority, Cuomo ally Anthony Masiello, chided the Canadians after attending his first meeting on Friday.

“For the first time in a long time, you’ve got a governor who wants to roll up his sleeves and get involved,” said Masiello, who told reporters he’d been appointed to bring peace to the process. “For people to get their noses out of joint on this is appalling.”