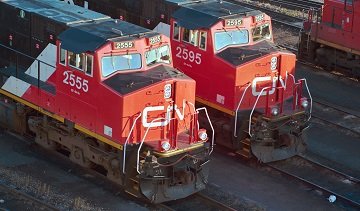 MIRAMICHI, NB—The Province of New Brunswick and CN have reached an agreement to preserve rail freight service on the line in northern New Brunswick.

“Freight rail is a critical mode of transportation for industries in northern New Brunswick, and it is a vital lifeline for the jobs and communities that rely on these industries,” said premier David Alward. “Our investment in the rehabilitation of two sections of railway line ensures companies in northern New Brunswick can continue to ship their goods to market efficiently and explore new opportunities for growth.”

Under the agreement, the Province of New Brunswick will invest up to $25 million in rail infrastructure improvements to the Newcastle subdivision. CN will in turn spend a comparable amount to maintain and operate the line, ensuring continued rail freight service for a 15-year period on the northern and southern sections of the rail line: between Irvco, NB, and Nepisquit Junction, NB, in the north and between Catamount, NB, and Nelson Junction in the south, where there are active rail freight customers.

The province’s investment will be used to rehabilitate and upgrade the rail line to the operating standards required to efficiently and cost-effectively handle current and projected traffic. The work will commence in the spring of 2014.

CN, the province and local businesses will continue to work together to increase freight traffic in future years, with benefits to be shared between the two partners.

Finn said: “We thank the provincial government for working with us over the last year to develop this agreement that will preserve rail freight service in northern New Brunswick. This agreement would not have been possible without the commitment of both parties to continuing investments and to the growth of rail freight traffic in the region.”

CN will seek to discontinue rail operations on the 44-mile middle section of the Newcastle subdivision, between Nelson Junction (mile 62) and Nepisquit Junction (mile 106), due to the significant investments required to maintain the line and the lack of both originating and terminating freight traffic on that section.

Before this part of the line can be discontinued, however, it will be offered for sale in early February to private interests and then to municipal, provincial and federal levels of government, as per the provisions of the Canada Transportation Act. They will have a five-month window to submit offers to purchase the middle section, should there be a desire to maintain rail service on the segment.