by Inside Logistics Online Staff June 2, 2021

Transport Canada and CP rail have signed an agreement that will allow the Lac Mégantic bypass project to proceed. 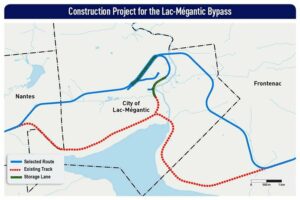 The Government of Canada confirmed on May 11, 2018, that it would fund 60 percent of the construction costs of the Lac-Mégantic bypass, with the government of Quebec  fund the remainder.

The project will be managed by Canadian Pacific Railway (CP), which acquired the Central Maine & Quebec Railway (CMQR) in December 2019. CP will own the bypass once the construction is completed.

The new agreement will facilitate the plans, specifications and regulatory authorization needed to complete this project. The agreement also includes several studies in the coming weeks on soil, water and fish habitat quality and on ambient noise levels.

The final right-of-way plan has been completed and negotiations to acquire the land are set to begin with affected property owners. The Government of Canada will have to acquire 80 properties, mostly parcels of land, to complete the Lac-Mégantic Bypass Project. These properties belong to 41 owners, including the City of Lac-Mégantic and the Ministère des Transports du Québec.

“From the start, our government, along with our dedicated teams working on this project, have made advancing the rail bypass project a priority,” said transport minister Omar Alghabra.

“This announcement marks the beginning of a new phase that will bring us closer to construction. I want to reassure the mayors and residents of the greater Lac-Mégantic area and tell them that the project will be completed in 2023.”

Once the bypass is in operation, the existing bypass between Nantes and Frontenac will be dismantled and transferred to Transport Canada. Remediation work may be carried out depending on the future land use. The Government of Canada intends to transfer these lands to the municipalities for public use.