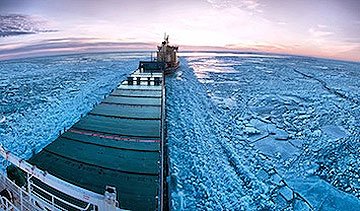 Canada may be missing the boat on using Arctic shipping to encourage development while Russia steams ahead on its own northern waters.

“At this stage, we’re not really in the game,” said John Higginbotham, a Carleton University professor and former Transport Canada deputy minister.

“The marathon started some time ago, but we haven’t sent in our application yet.”

As Prime Minister Stephen Harper makes his annual visit to the North to observe military exercises, Arctic experts suggest he would be wise to also take a look at what’s happening in Russia. Shipping on that country’s Northern Sea Route across the top of the continent is booming and hauling resource projects in the Russian North along with it.

“I had an e-mail from someone from a Greek shipping company a few days ago who commented that Russia is actually 50 years ahead of any Arctic country in terms of seizing on the opportunity,” said Michael Byers, author of a forthcoming book on international law and the Arctic.

The contrasts are stark.

A total of 421 commercial vessels have applied for permission this season to use Russia’s Northern Sea Route, which cuts days off the shipping time between Asia and northern Europe. They will be aided by nearly two dozen icebreakers and protected by a string of 10 up-to-date search-and-rescue centres along the route.

Ports are being upgraded. Sea lanes are well-understood and comprehensively mapped. Co-operation with maritime neighbours such as Norway is strong.

Canada has no Arctic commercial ports. Mapping is so poor that cruise ships have run aground and captains use old Soviet-era charts to supplement Canadian ones. The Coast Guard’s six icebreakers are not available to accompany routine commercial voyages.

Arctic search and rescue remains based in southern Ontario and depends on planes that were scheduled to have been replaced long ago. And disputes with the United States about border issues and the status of the Northwest Passage add legal uncertainty for shippers.

Only 61 tankers and cargo ships entered the Canadian Arctic last season, most of them related to community resupply. Crossing the Northwest Passage remains largely a goal for adventurers—including, this summer, two crews in rowboats.

Russia is starting to see the benefits, said Byers, who is a professor at the University of British Columbia.

Shippers are paying fees, which helps defray costs of the improved sea route. And the busier transportation corridor is already starting to stimulate development inland.

A railroad between Russia’s mineral-rich interior to its Arctic coast is planned. Liquid natural gas facilities on the coast are also slated.

“There’s a clear link between the Northern Sea Route as the international cargo route and the focus on the economic development of northern Russia,” Byers said.

Higginbotham, who oversaw a billion dollars worth of federal spending on the Asia-Pacific Gateway transport project to boost trade with the East, said the Arctic is a clear priority for Russian president Vladimir Putin.

“It’s part of the renaissance of Russia after the collapse of the Soviet Union. The opening of the Arctic, I think, Putin sees as one of his half-dozen highest priorities in terms of restoring Russian greatness.

“I’m pretty familiar with what an active strategy to use transport to drive development looks like, and I don’t see any sign of that in either the US or Canada.”

Byers said the case is strong for increased spending on all northern transportation links, including the Northwest Passage.

“You can be a Nervous Nellie and say we might make economic investments that don’t pay off, at least not in the short term. But we build highways and railroads and ports and airports in southern Canada on the basis of projected and desired increases.

“The Russians are building their Arctic gateway right now,” said Byers. “A 10-fold increase in shipping volumes over four years speaks volumes to how prescient the Russian government has been.”