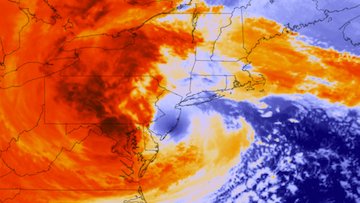 The storm has been cited as the cause of 87 deaths (69 in the Caribbean, 17 in the US and one in Toronto), has shut down the New York Stock Exchange, left millions without power, and caused US President Obama to declare the states of New York and New Jersey as major disaster areas. State-level emergencies have also been declared for Connecticut, Maine, Massachusetts, Maryland, Pennsylvania, Virginia, and North Carolina.

Sandy has also forced closures and delays at many key transportation hubs.

The George Washington Bridge, Goethals Bridge, Bayonne Bridge and Outerbridge Crossing, which all all under the control of the Port Authority, are also closed, as is the Holland Tunnel.

All of the Port Authority’s maritime facilities, including the adjacent rail yards, remain closed.

The Port of Baltimore’s public marine terminals will be closed on Tuesday to all ship and truck traffic due to weather conditions from Hurricane Sandy.

The Port of Virginia is in better shape, as all terminals are now open, although “there will be no vessel operations until the port assessment has been completed by the US Coast Guard and the sea lanes reopened, the truck gates, transfer zones and on-dock rail will be operating.

“Motor carriers will be able to interchange empty containers, but will have to do so at the main terminals because the empty yards are still in storm preparedness mode. We anticipate the opening of the Norfolk and Portsmouth empty yards later Tuesday morning.”

Part of the New Jersey Turnpike was shut down after approximately two dozen rail cars were pushed onto the road by the storm. At this point, it is unknown what the tanker cars were carrying, but NBC New York is reporting ethanol is one of the most popular chemicals transported over rail from the New York Harbour.

Joseph Szabo, administrator of the US Federal Railway Administration (FRA) declared Sandy to be an “emergency event”. As a result the FRA’s Emergency Relief Docket and the emergency relief provisions in effect.

Norfolk Southern Corp is reporting that it continues to experience service interruptions related to Hurricane Sandy. A notice on its website says “traffic from Virginia through New England may be impacted by heavy rains, flooding, and high winds. Rail traffic in these areas should expect delays of at least 72 hours.”

Operations are CP are still being affected by the storm. The railway is warning customers to expect delays to shipments destined for the affected areas. It also issued a statement notifying customers that “the Ports of New York, New Jersey and Philadelphia are now shut-down and all freight traffic destined to these ports is suspended until further notice. CP will continue to accept traffic destined for these ports until the duration of closures is becomes known.”

Air flight tracking website, FlightAware.com reports a total of 15,773 flight cancellations due to the Hurricane. There were 1,300 cancelled on Sunday, 7,791 cancelled on Monday, and so far there have been 6,047 cancelled today. According to the website, “Most affected is still Philadelphia with with 1,085 cancellations, NYC airports have nearly 1,000 each. We expect more cancellations to happen, especially in NYC, soon.”

It also predicts more cancellations for Wednesday. “Only 635 cancellations so far tomorrow (Wednesday). We expect this number to rise once damage can be assessed and re-open times are communicated.”

On the positive side, a travel ban in Connecticut has been lifted. On Monday, the governor first ordered all trucks off the state highways and then initiated road closures on the  highways, but as of today the restriction is no longer in force.

The American Logistics Aid Network (ALAN) is acting as a liaison between the supply chain community and relief agencies.

“We are in communication with state, regional, and national Voluntary Organizations Active in Disaster (VOADs) as well as emergency management agencies,” said Jock Menzies, president of ALAN, a non-profit organization that engages the supply chain community in support of humanitarian relief efforts. “We are standing by to provide assistance for transportation services, staging areas, storage, expert advice, and other vital resources.”

ALAN is accepting donations of goods and services, and is aggregating needs posted to the National Donations Management Network (NDMN) from the affected states. To donate see the ALAN website.

It is also working with Rutgers University to gather information about business disruptions. The research will to “help identify potential resource shortfalls and determine where support from emergency and non-profit organizations may be needed most”.  Click here to report business disruptions.