Will co-operate on routes to-and-from Asia 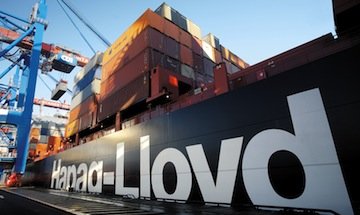 Hapag-Lloyd is one of the members of the G6 Alliance

WASHINGTON, DC—The US Federal Maritime Commission has agreed to allow the G6 Alliance to go into effect in the US, thereby removing one roadblock to the group’s plan of a May 2013 service launch.

In getting approval from the FMC, the alliance has been given permission member shipping companies permission to “charter and exchange space on the parties’ vessels” and “co-ordinate and co-operate with respect to the parties’ transportation services and operations in specific trade lanes”.

Beginning in May, the G6 Alliance intends to deploy over 50 ships in trans-Pacific trade. Those vessels will call on nearly 30 ports. The agreement covers the east coast of Canada, the east coast of the US, Egypt, Hong Kong, Italy, Jamaica, Malaysia, Panama, People’s Republic of China, Saudi Arabia, Singapore, South Korea, Spain, Sri Lanka, Taiwan, Thailand, United Arab Emirates, and Vietnam. Half the services will travel through the Panama Canal and half will utilize the Suez Canal.

While it has approved the agreement, the FMC is not taking a hands-off approach to the G6’s presence. The commission intends to create a monitoring program to track the alliance’s activities and perform early detection of capacity coordination among carriers and agreements operating in the market.