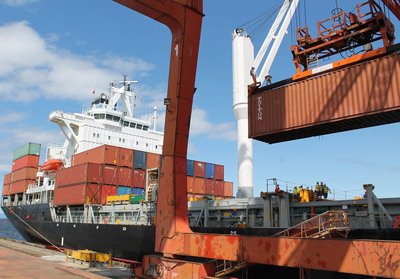 NANAIMO, BC—The arrival of the M/V Westwood Pacific at the Nanaimo Port Authority’s Duke Point terminal on August 19th is the first container ship to berth at the Port’s facilities and will provide a direct link to Asia. Westwood Shipping Lines operate a dedicated break bulk and container service to Asia and have been evaluating the Vancouver Island market for some time. This trial call, with express service to Japan, Korea and feeder service to other Asian ports, is expected to lead to a regular service, providing Vancouver Island manufacturers the option to ship their goods from Nanaimo.

The Nanaimo Port Authority (NPA) has been working with terminal partner, DP World Vancouver, to create a direct competitive connection for Vancouver Island customers to Asia Pacific markets and the arrival of this container ship is one step closer to realizing this goal. The NPA recently received $4.5 million from the federal government as part of the Asia Pacific Gateway Corridor Initiative Program. These funds are intended to upgrade the Port’s container operation at the Duke Point Terminal.

“The trial call from the M/V Westwood Pacific is an exciting time for Vancouver Island importers and exporters and will prove that the NPA can offer competitive deep-sea connections to global markets. We are sure that Westwood Shipping Lines will be pleased with the service, efficiency and potential volume of business that can be provided from Vancouver Island, and will hopefully announce a regular containerized liner service from Nanaimo as part of their global operation” commented Bernie Dumas President & CEO of the Nanaimo Port Authority.

“Through the Port of Nanaimo gateway to Asia at Duke Point, Westwood Shipping Lines can provide consistent container/break bulk service designed to meet the needs of Vancouver Island.  We have every expectation that our first two ship calls will demonstrate that the region will support continuation of the service. The Port of Nanaimo, ILWU Local 508, and DP World Vancouver have been very supportive in promoting this service” says Guy Stephenson, President and CEO of Westwood Shipping Lines, Inc.

The Nanaimo Port Authority is one of 18 Port Authorities across Canada, established under the Canada Marine Act, to promote and support the National, Regional and local economy and to ensure a safe and secure harbour for Cargo Operations.