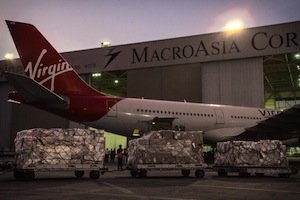 LONDON, UK—Over 82 tons of medical supplies and equipment needed to help victims still dealing with the aftermath of Typhoon Haiyan have reached the Philippines after Virgin Atlantic Airways offered its support to UNICEF and Save the Children.

With four of its aircraft heading to the Philippines for routine maintenance work, Virgin Atlantic approached the charities to offer the cargo capacity on the flights free of charge. Shipments destined for UNICEF staff on the ground in the Philippines and the country’s Department of Health included hospital equipment, water purification tablets and life-saving drugs to treat malaria, bacterial infections and diarrhoea. The flights also carried kits for midwives to help mothers give birth safely and protect their babies in the first months of life, crucial drugs and medicines, including amoxicillin to help fight off bacterial infections, and medical equipment that helped Save the Children re-equip and run mobile health units and hospitals in affected areas.

Simon Porter, Virgin Atlantic Cargo’s Operations Manager, Heathrow, said: “It is six months since Typhoon Haiyan struck the Philippines and its tragic consequences led to a global relief effort and public donations as a result of news coverage and appeals straight after the storm. However, the relief effort carries on long after the media leave and organizations such as UNICEF and Save the Children continue to do an outstanding job helping the long-term victims. We are pleased that we had the opportunity to help them in their vital work.”

Typhoon Haiyan hit the Philippines six months ago. It was one of the strongest tropical cyclones ever recorded, claiming over 6,000 lives and leaving 1.7 million people homeless.

Paul Ainslie of Save the Children said: “We want to extend a massive thank you to the team at Virgin Atlantic Cargo for the extraordinary help and support they provided to us with the cargo flights to the Philippines. The latest flight carried medical supplies and this will have an incredible impact in terms of supporting families and saving lives.”

David Bull, UNICEF UK’s Executive Director said: ‘Children are still suffering as a result of typhoon Haiyan which devastated the Philippines six months ago. We are so grateful to Virgin Atlantic Airlines for providing space on their flights so that UNICEF can continue to get lifesaving supplies to those in desperate need. Since the typhoon hit, UNICEF has vaccinated over one million children against killer diseases, provided safe water to nearly one million people and delivered school equipment to nearly half a million children.’

Since the typhoon hit, UNICEF has vaccinated over one million children under the age of five against killer diseases. Nearly one million people have been provided with safe water and nearly half a million children have been equipped with education material. Around 17,000 children have also been given support to help them cope with the impact the typhoon has had on them and their families.