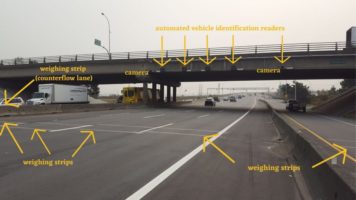 Commercial drivers on the Lower Mainland are benefiting from time and fuel savings, thanks to the Weigh2GoBC program and cutting-edge technology.

British Columbia’s ministry of transportation and infrastructure has recently installed weigh-in-motion strip sensors in all six lanes of Highway 91, south of Vancouver. Southbound trucks heading toward the Nordel Inspection Station, including the on-ramp from Cliveden Avenue and the counterflow lane will cross the sensors.

Commercial drivers who are registered and approved for the Weigh2GoBC program and pass a credential check may be able to bypass the Nordel Inspection Station. 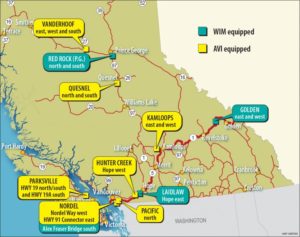 The Weigh2Go system allows drivers to potentially bypass 11 inspection stations throughout the province. (Image: B.C. Ministry of Transportation and Infrastructure)

The sensor strips are integrated with automatic vehicle identification equipment mounted on the Cliveden Avenue Overpass, that connects with the vehicle’s transponder and loads the vehicle’s credentials. The weight and size information from the strips is added, so that a complete check of weights, dimensions and credentials is performed while the vehicle is travelling at highway speed.

Cameras on the overpass allow inspectors to double check images of truck registration plates against the transponder data to ensure there are no discrepancies.

The whole electronic vehicle reporting process – from driving over the weighing strips, to getting the green or red light – happens in just seven seconds. During that time, the vehicle covers about 500 metres.

If everything checks out the driver’s transponder displays a green light, meaning it’s OK to proceed. Drivers can then bypass the Nordel station and the 10 others that are equipped with the Weigh2Go sensors.

If a red light is shown, the driver has to stop at the inspection station.

The ministry estimates reduced driver times and fuel costs have saved the industry more than $49 million. These include more than 1.7 million litres in fuel savings as a result of not idling through the stations and a reduction of over 3.2 million kilograms in greenhouse gas emissions.

In a ministry example, a truck travelling from Vancouver to Calgary would have to make three stops each way on the trip. Each of the six stops would take approximately 10 minutes, for a total of an hour lost time each round trip. For a carrier operating 20 trucks on the route, that’s 20 hours saved. If 20 trucks make two trips each week, that is a savings of 40 driver hours per week, over 173 hours per month, or more than 2,080 hours per year.

The system also allows fleets to monitor drivers’ compliance performance. Fleet owners can request a higher rate of random checks for specific drivers which means they will be required to report in to the inspection stations more often.

Weigh2GoBC is open to all Canadian and US carriers with commercial vehicles licensed for travel in BC.