Will run from DCs to stores on fixed routes 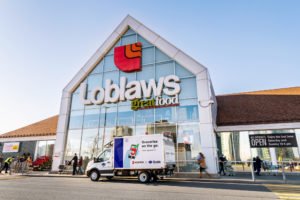 The five trucks will deliver orders from the automated DC to stores. (Photo: Gatik)

TORONTO – Canada’s largest grocer is set to become the first company in the country to deploy self-driving delivery vehicles.

Loblaw will roll out the autonomous fleet in January.

It is being done in partnership with the California-based autonomous vehicle startup Gatik AI, which focuses on business-to-business short-haul deliveries using light- to medium-duty trucks.

The company will operate the vehicles on five routes with fixed drop-off spots, it said.

The announcement follows the successful completion of a 10-month on-road pilot in Toronto with one autonomous delivery vehicle, Gatik said.

“With this initial rollout in Toronto, we are able to move goods from our automated picking facility multiple times a day to keep pace with PC Express online grocery orders in stores around the city.”

All vehicles will have a safety driver as a co-pilot.

But wouldn’t it be better to wait until fully autonomous vehicles are available?

“The point of the pilot is to understand how this technology can enhance our supply chain along with middle-mile delivery,” a Loblaw spokesperson told Today’s Trucking.

“We, along with others in the industry, are looking to understand the challenges and benefits of this technology.”

Loblaw said it chose Gatik because the startup is a leader in autonomous middle-mile delivery.

“Once we started to engage with the team at Gatik, it became clear our partnership would be mutually beneficial because Gatik was interested in testing their trucks in different weather conditions, which is an important factor when dealing with the unreliable weather we face in Canada.”

The company said the cost would not be passed on to the consumers.

Gatik’s customers include Walmart, which deployed its trucks in Bentonville, Ark., in June 2019.

The company said it has already completed more than 30,000 revenue-generating autonomous deliveries for multiple customers in the U.S.

“Loblaw is one of Canada’s leading grocery retailers and we are proud to be selected to play a key role in enhancing the safety and efficiency of its already robust supply chain,” said Gautam Narang, CEO and co-founder of Gatik.

“Retailers know the biggest inefficiencies in their logistics operations often exist in the middle-mile, typically between automated picking facilities and retail locations. This is where Gatik lives and succeeds, and is the reason we are able to offer immediate value to our customers.”

Gatik also said Monday it had raised US$25 million in a second round of financing, taking the total to $29.5 million.

The company was founded in 2017. It has offices in Palo Alto, Calif., and Toronto.