Emission reductions and charitable giving part of the bigger picture 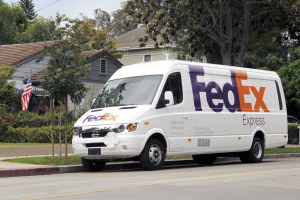 Fleet electrification is one of the ways FedEx is reducing its carbon emissions. (FedEx photo)

The company has released its 2020 Global Citizenship Report (GCR), detailing its corporate social responsibility strategies, goals, programs and progress. The 12th annual report includes updates on the progress of the company’s citizenship goals in FY19, which ended May 31, 2019,

The company’s efforts have contributed to a 40 percent reduction in CO2 emissions intensity on a revenue basis across the enterprise since FY09, a period in which revenue grew by 96 percent.

FedEx avoided more than three million metric tons of CO2e emissions as a result of enterprise-wide fuel and energy saving initiatives, equivalent to the carbon sequestered by more than four million acres of U.S. forests in a single year.

FedEx continued to remain on the cutting edge of fleet electrification. The company announced in early 2020 that it started construction on electronic DC (direct current) charging stations through an agreement with Chanje Energy Inc.

The company plans to electrify 42 FedEx stations in California, making it one of the largest deployments of integrated charging infrastructure by a single commercial fleet to date. In addition, FedEx added 390 electric vehicles in FY19, bringing the total number of EVs to almost 3,000.

In FY19, FedEx Express and Boeing completed innovative formation flight tests that confirm the potential for reducing fuel consumption by flying in the wingtip vortex of the lead aircraft, also known as “wake surfing.” It could potentially reduce fuel consumption by up to 10 percent.

In 2019, FedEx surpassed its citizenship goal set in 2016, to invest US$200 million in 200 global communities by 2020. The company invested more than $62 million in corporate charitable contributions as part of FedEx Cares in FY19.

In FY20, FedEx launched an ambitious new initiative to build on that good work. FedEx Cares 50 by 50 aims to directly impact 50 million people by the company’s 50th anniversary in 2023. FedEx Cares 50 by 50 enables social change around the world through a combination of charitable giving, in-kind contributions, and team member volunteerism focused on direct and positive impacts to individuals.