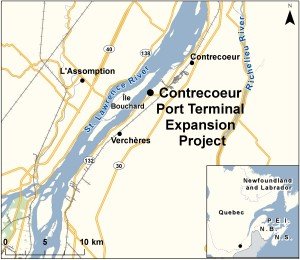 The Port of Montreal’s Contrecoeur container terminal has received the go-ahead from the Impact Assessment Agency of Canada. The federal environmental assessment began in January 2016.

The Port Authority has proposed to build a container terminal with a maximum annual capacity of 1.15 million containers on its property located in Contrecoeur, approximately 40 kilometres downstream from Montreal, on the St. Lawrence River. Located in an industrial zone, the Contrecœur land reserve was acquired over 30 years ago by the port authority.

The project would include the construction of a 675-metre dock for two berths to accommodate vessels between 39,000 and 75,400 deadweight tonnage (DWT). It will also include a seven-track classification yard, a container storage and handling area, an intermodal rail yard, support facilities, rail and road accesses and a truck control area.

The port has financial support from the Canada Infrastructure Bank and private partners, and intends to have the site operational by 2024.

The port authority says it welcomes the decision statement by the Minister of Environment and Climate Change Canada on the Contrecoeur expansion project.

“This favourable decision opens the way to building a new container terminal, a key public utility for the development of Quebec and Canada. Local businesses will be able to make the most of a future infrastructure with great economic benefits, with a minimal impact on human, aquatic and terrestrial ecosystems,” said Martin Imbleau, president and CEO of the Montreal Port Authority.

The MPA intends to continue its close cooperation with local and regional partners, including the various authorities concerned such as First Nations, in order to maximize the project’s positive benefits.

The Assessment Agency imposed conditions on the project requiring further consultation with the local First Nations groups, as well as continuing public consultations and reporting standards. It also requires construction and dredging to be conducted so as to create minimal impact on fish habitat and on the surrounding vegetation and landscape on shore.