The evolution of temperature-controlled containers 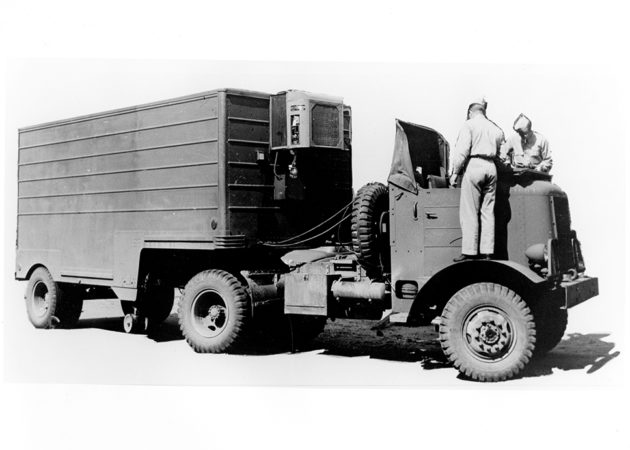 In a previous article, we talked about the beginning of containerization some 60 years ago, when the Ideal X departed from the port of Newark, New Jersey on April 26th, 1956, carrying 58 containers bound for Houston, Texas.

This time we’re looking at a specialized type of ocean container called a ‘reefer’, the common abbreviation for refrigerated container. They are also called, perhaps more appropriately, temperature-controlled containers.

The latter term describes them better, since the temperature range of today’s reefers generally covers from +30 Celsius to –30 Celsius. We can heat the cargo, keep it cool or keep it deep frozen. In short, they permit the safe and efficient worldwide transportation of a wide variety of products ranging from meat, seafood, fruits, vegetables and dairy products to pharmaceuticals and chemicals.

History
When and how did it start? This began thanks to the work of Frederick McKinley Jones, an engineer born in Cincinnati, Ohio in 1893, who invented the first portable air-cooling unit in 1935. He went on to form the US Thermo Controls Company.

Originally trained as a mechanic, Jones was awarded 61 patents in refrigeration equipment as well as in a variety of other fields, like X-ray machines, sound equipment and gasoline engines. These refrigeration units were placed on the outside of trucks that carried perishable foods and this innovation greatly improved their long-haul overland transportation.

They were used by the US Army in World War II and variations of the Thermo-King units, as they were called, were used in Europe, Africa and the South Pacific, cooling everything from drinking water to blood plasma. Military personnel in field hospitals, repair shops and transport trucks were made more comfortable and plane cockpits were also cooled by Thermo’s control systems.

In 1955, the Thermo Controls Company was renamed Thermo King (the name of its leading product). The ability to keep food fresh or frozen during transport helped the growth of the frozen food and supermarket industries in the early 50s.

Bought by Westinghouse in 1960, Thermo King changed hands again and became part of Ingersoll Rand in 1997. Today, the company is still one of the market leaders for transport refrigeration equipment, together with Carrier Transicold, a United Technologies company.

Cooling at sea
On the ocean, in the early 1960s, shipping lines developed insulated containers commonly known as ‘porthole containers’. They were connected to the ship’s cooling plant and had two holes at the top and bottom of one of the ends. Cool air was pumped in the bottom of the unit and warm air extracted from the top. These looked like portholes, hence the name.

The first refrigerated marine containers were developed in the late ‘60s, based on converted truck units, thanks to Fred Jones’s invention. The first reefers with integrated cooling units came to life in the early 1970s.

How different are these reefers from standard containers? Reefer containers come in 20-foot and 40-foot lengths, with the outside dimensions identical to standard containers of the same size. However, they are slightly smaller inside due to the necessary insulation material sandwiched between the exterior and interior finishing of the walls, ceiling, floor and doors.

As well, there is space taken by the refrigeration unit and ventilation equipment at the front (about two feet deep). The floor of reefer containers is ducted, with T-shaped aluminium extrusions to allow air to circulate at the bottom. In addition to the container itself being slightly smaller inside, cargo must be loaded in such a way as to allow air circulation between the rows of packages, at the door and at the top, hence there is some loss of usable space.

Before reefer containers are dispatched to shippers for loading, they are inspected and pre-cooled or pre-tripped (short for “preparation for the trip”) to the desired temperature at the terminal, by the carrier or its representative. When at the terminal and on board ships, they are plugged into the ship and/or shore electrical power, while when moving over the road or by rail, external diesel generators are required to power the refrigeration machinery and maintain the temperature.

These can be integral parts of the truck’s chassis, but the more commonly used ones are the clip-on type mounted on the container itself for the journey over the road and removed when the reefer comes back to the terminal or the port. When reefer containers move by rail, the railways can use the individual clip-ons or powerful diesel generators mounted on a railcar that have up to 16 plugs to which refrigerated containers are connected for the intermodal move.

In this context, should the machinery malfunction and cause the goods to lose their quality or spoil altogether, it is essential for the cargo owner to be able
to demonstrate what happened and where. Reefer containers generally have temperature recorders that generate a chart for each voyage, but these are not always reliable and since they are within the control of the carrier, they are not always freely accessible.

Atmospheric control
Besides maintaining the required temperature, a new variety of reefers was developed in the ‘90s to control the atmosphere inside the container, so as to slow down the ripening process of fresh fruits and vegetables. These are called ‘Controlled-Atmosphere’ or CA containers.

They are equipped with oxygen and carbon dioxide sensors, pumps to extract the carbon dioxide produced by the cargo, and ventilation to let in fresh air when the oxygen level drops below a certain level. The pumps can inject nitrogen or carbon dioxide during the transport. Different features are used depending on the cargo, to control the ripening process and to make it possible for our grocery stores to stock all sorts of fresh produce and fruits year-round.

Reefer containers are used to transport both chilled and frozen cargo. They can be used seasonally as well to protect cargo from freezing, for example wines and spirits shipped in winter, or to protect some products from excessive heat, like chocolates or candies shipped in summer. They are also used to protect sensitive products and equipment that can be affected by wide differences in temperature, for example when we ship goods from Canada to Asia via the Panama Canal, where the tropical temperatures experienced year-round can affect some types of cargo.

Reefer madness
What are the main challenges for carriers? Aside from the high up-front purchase cost and the subsequent operation and maintenance costs, one of the biggest challenges is equipment imbalance and matching imports and exports. This is increased by the seasonal nature of some of the commodities carried.

For example, New Brunswick ships frozen French fries year-round, but the export seasons of Nova Scotian crab or Lac-St-Jean wild blueberries tend to be short. In order to alleviate this, many ocean carriers bring in non-operating reefers (NORs), using them as dry boxes to carry non-refrigerated cargo. This enables the carriers to earn dry cargo rates from those imported reefers rather than just shipping them empty in order to meet the export needs.

Temp-control trends
Current and future developments include a general tendency towards using more 40-foot reefers and fewer 20-foot units. This is due to the limited space available in 20-foot reefers compared to 40s, while the building and maintenance costs are almost equivalent.

Addressing ever-increasing traceability and safety requirements, particularly for perishable foodstuffs, carriers are developing monitoring systems to allow real-time tracking of the position and temperature of reefer containers around the globe.

Another interesting innovation was just launched by CMA CGM: the Aquaviva, a new generation of containers that allows the safe carriage of live lobsters in their original water, in conditions maintaining their natural habitat. Currently, lobsters are shipped either frozen in ocean containers or live and packed in ice by airfreight.

With this new container, live lobsters can travel by sea in optimal conditions, with the water temperature and oxygen level maintained during the voyage. The initial market for this will be North America to Europe, as the short transit times of seven to 10 days from Halifax to North Europe ports help to make this method feasible.

As more and more commodities are carried by ocean freight in reefer containers, including very expensive pharmaceuticals that may previously have been shipped by air, this puts pressure on ports, terminals and inland carriers to maintain the infrastructure necessary to accommodate these movements efficiently. In some regions, this includes cold storage facilities for trans-loading.

Going bananas
What better example of the popularity of reefer containers than the banana trade from Colombia to North America. This trade used to be handled almost exclusively as breakbulk in specialized reefer ships transporting several thousand tons at a time by the now defunct Flota Mercantile Grancolombiana. They were offloaded from the vessel by crane one pallet at a time and transferred to dock-side warehouses for eventual distribution, a risky process potentially leading to spoilage.

Today, all the Colombian bananas we consume arrive in reefer containers, several hundreds per vessel, and move direct from port to distribution centre or store, providing a more reliable product to the final consumer.