December 28, 2018
by Inside Logistics Online Staff

December 28, 2018
by Inside Logistics Online Staff 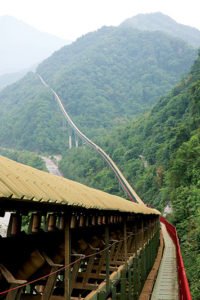 The troughed belt conveyor runs through rough terrain and over unstable ground.

What do you do when the government suddenly decides to flood the roads you use to get raw materials to your production facility?

That’s what happened to the Sichuan Yadong Cement Co, Ltd. located near Chengdu, the capital of Sichuan, in southwestern China. As they were building a new cement plant in 2004, the local government opted to build a dam and flood the route of an abandoned railway that was to take from the limestone quarry to the plant. Alternate trucking routes were too long, so the manufacturer got creative.

They contracted the Beumer Group to instead build a conveyor line from the quarry to the plant. The 12.5-km troughed belt conveyor navigates through hilly terrain and nature reserves, over streams and unstable ground.

Beumer Group managed the mechanical and electrical engineering, supplied the core components for the overland conveyor and monitored and commissioned its installation. “Our colleagues at Chinese subsidiary Beumer Machinery Shanghai were able to work closely with the customer. They know the speciﬁc local customs, speak the language and are familiar with the particular market and customer requirements,” said Andreas Echelmeyer, director of conveying and loading systems at Beumer Group. 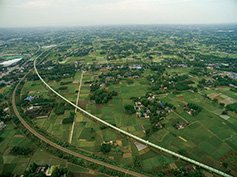 From the quarry to the cement plant: Beumer Group built a 12.5-km-long conveyor through hilly terrain and unstable ground in the Chinese province of Sichuan.

The terrain is hilly and covered with dense bamboo forest, parts of which are listed as nature reserve. For this reason, the government would approve neither a service route nor deforestation to build the conveyor. The ground also presented a major challenge for the engineers. “The ground is unstable due to previous coal mining. In other areas, the ground consists mostly of granite that could only be partially removed,” Echelmeyer said.

Another 1.5-km section of had to be guided across a river. These conditions meant that 90 per cent of the system was installed manually on site. As it was impossible for trucks to transport the components, they were carried by mules, one part at a time, to the installation location.

The route of the overland conveyor was coordinated between Beumer Group and the cement manufacturer. The supplier calculated the tractive forces of the belt, considering the eight horizontal curves with radii of 1,000 to 5,000 metres. The routing was checked for its feasibility by employees working on foot, passing through rough terrain, in order to verify the predeﬁned positions for the 460 supports it required. 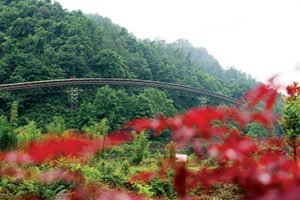 Whenever technically possible, the routing of the conveyor was adapted to the topography.

Whenever technically possible, the routing of the conveyor was adapted to the topography. Height differences of up to 100 metres had to be overcome within the shortest possible distances, so several sections were equipped with bridges of up to 55 metres. One section required a 130-metre-long tunnel.

The supplier developed, built and supplied the core components for the drive and take-up station as well as a belt of an overall length of 25 kilometres, the idlers and the drive technology. On commissioning, the overland conveyor could reach a mass flow of 1,500 tons per hour and a conveying speed of four metres per second.

“Compared to other conveying solutions, the open troughed belt conveyors are suitable for higher throughputs. Horizontal as well as vertical curve radii are possible,” Echelmeyer explained. “They can be adapted to the speciﬁc task and topography. Using BEUMER calculation programs, we can precisely calculate the static and dynamic tractive forces of the belt during the development phase of the system. This is a prerequisite for the safe dimensioning of horizontal curves. The type of drive technology and conveyor belts needed are based on these calculations. This ensures longevity of the entire system.” 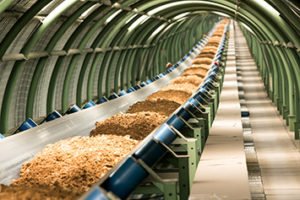 View of the enclosed conveyor flight in the area of the bridge.

In February 2009, the overland conveyor began transporting material from the quarry to the bulk loading system. Since commissioning of the ﬁrst section, the mass flow of the conveyor was increased in two steps. Today, the system conveys 2,200 tons per hour at a conveying speed of 4.5 metres per second.

In July 2013, Asia Cement contracted Beumer Group again for an additional overland conveyor to replace the trucks transporting limestone from the bulk loading system to the cement plant. A mass flow of 2,200 tons of limestone per hour was necessary to meet the plant’s requirements.

“We were planning a second troughed belt conveyor with an overall length of 13.7 kilometres,” Echelmeyer said. “This is the longest system in our company history.”

During the planning phase, the cement manufacturer acquired another plant in Lanfeng, approximately ten kilometres away. “Now we had to design the system so that both plants could be supplied with limestone,” explained Echelmeyer. The team had to divide the overland conveyor in two parts.

In February 2015, Beumer started with the installation of the conveyor frame. Both overland conveyors have four horizontal curves with radii of 1,200, 1,500 and 1,800 metres. “We provided the engineering and the individual parts such as pulleys, motors, drive and control technology and the entire automation,” Echelmeyer said. The troughed belt conveyor is now supplying three kiln lines; a fourth line is planned.

The requirements were different for the two projects. The challenges for the ﬁrst project were the hilly terrain, unstable ground and crossing through conservation areas and over waterways. For the second project the system had to be built crossing through populated areas. The Chinese government set out exact regulations on the noise emission levels so that the residents would not be impacted. “We had to minimize the noise to an extremely low level,” Echelmeyer noted. “We used noise-reducing idlers and customized protective covers on the drive stations.”