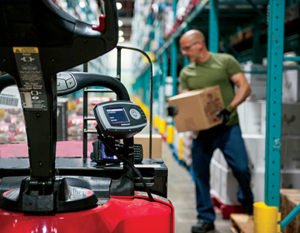 The NSLC story begins in the late 1920’s–when Nova Scotians voted in favor of retailing beverage alcohol. This movement paved the way for the establishment of the Nova Scotia Liquor Commission on May 1, 1930.

In 2001, the NSLC changed from a commission to a provincial crown corporation. Today, there are 106 retail stores and 60 agencies across the province, generating more than half a billion dollars annually. The Corporation is growing as well, with sales value and volume each up 10 percent over the past year.

Stores continue to evolve as new concepts for layout, customer service and merchandising are brought forward. The retailer uses exclusively Raymond trucks in its warehouse and works closely with Raymond sales and service centre, GN Johnston, to optimize their facility.

Maintenance and management
The NSLC is especially proactive in protecting its biggest asset—the people. The corporation encourages all employees to take personal responsibility for themselves and the equipment they use to do their jobs.

But managers still needed better insight into the daily activities of forklift operators to be able to support this, along with more information that would allow them to make general warehouse decisions and improvements.

They decided that a fleet management solution would help them keep track of how things were functioning, as well as offer opportunities for savings in maintenance.

After careful deliberation they decided on a solution from Raymond that would complement their fleet of lift trucks. The corporation wanted to receive alerts related to improperly performing equipment or equipment that has sustained damage, while features like customizable startup speeds and records of service history aiding in reporting sold them on the solution.

That solution was iWAREHOUSE, Raymond’s telematics system that can be installed into every lift truck in a warehouse.

The system was installed on the warehouse trucks, allowing managers to collect and report on operational and maintenance data for their industrial vehicle fleets and operators. As an added bonus, the NSLC found that iWAREHOUSE helped managers keep track of operator certifications and helped ensure they were up-to-date on training.

Savings and accountability
The NSLC experienced immediate payback from the system, and was able to manage the warehouse’s equipment and operators more efficiently and effectively. Employees were even more accountable and responsible on their trucks, leading to a decrease in damage to equipment and racking in the warehouse.

There was an immediate change in employee behavior when the system was implemented. Operators liked having the knowledge that the equipment was up-to-date on maintenance and would perform well. New employees embraced the ability to operate the equipment with their customized reduced speed, as did seasoned veterans who worked in their area. Managers were better equipped to provide a comfortable operating environment for their people and machines with a clear picture of exactly what was happening in the warehouse.

Soon after implementing iWAREHOUSE, the NSLC was looking to replace an older truck, but the telematics system reported that NSLC’s perception of the usage of the truck was much lower than the actual usage. As a result, NLSC elected not to replace it.