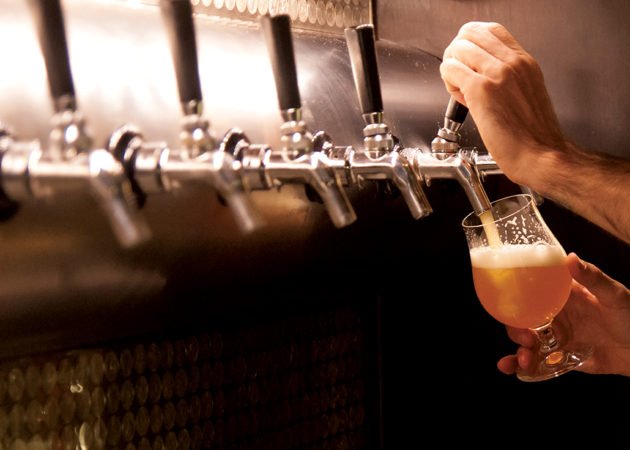 As Canadians (and Americans) debate the TransCanada Energy East Pipeline linking Alberta to Montréal, Québec City and St John, New Brunswick or the Keystone XL pipeline feeding US Gulf Coast refineries also from Alberta, Belgians have built a unique pipeline in record time and with the full consent of the local population. But theirs carries beer, making it a more palatable prospect than crude.

On September 16th, a Belgian brewery, Brasserie De Halve Maan, inaugurated a beer pipeline crossing the historic centre of Bruges. This picturesque medieval town is famous for its canals and often billed the “Venice of the North”. It attracts over six million tourists a year and is a Unesco world heritage site.

De Halve Maan are now transporting beer in this 3,276 metre-long pipeline from the brewery, in the centre of the town, to the bottling plant on the outskirts. Construction took a little over 10 months at a cost of five million euros. 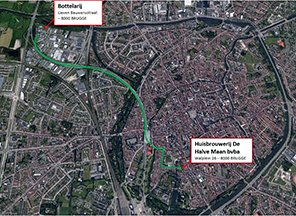 The pipeline’s route, right through the heart of Bruges.

Designed by the Belgian company Denys, specialized in the oil and gas industry, the project incorporates a system that cleans and rinses the pipeline and maintains strict controls in order to guarantee the top quality of the precious liquid. The pipe has a diameter of 6.5 centimetres and is made of high-grade plastic.

A long tradition
The De Halve Maan brewery was founded in 1856, though there has been a brewery on the site since 1564. The brewery has been a respected part of the historic city centre of Bruges for hundreds of years and prides itself on brewing every single litre of its beer in the heart of Bruges.

“At the moment our huge tankers have constantly to make their way through the narrow streets of Bruges,” said CEO Xavier Vanneste. “That’s no longer sustainable. This beer pipeline means that we’ll be able to remain in the city.”

Intent on continuing this tradition, the owners developed the pipeline idea not just for cost savings but also for environmental reasons: they wanted to do away with their tank trucks delivering beer to the bottling plant across town up to five times a day. 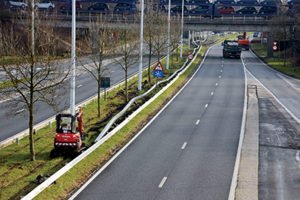 The pipeline generally follows the routing of the city’s water lines.

Satisfying a thirsty crowd
In order to fund this project, the owners obtained a modest subsidy from the Flanders government. But they also developed an innovative crowdfunding solution, calling on beer lovers around the world to help fund it. This very successful effort raised 300,000 euros. For 220 euros, contributors received a “bronze membership”, a 75cl bottle of Brugse Zot Blond (the brewery’s classic best seller) every year, plus a personalized beer glass.

An 800-euro contribution got you a case of the same premium beer every year and six personalized beer glasses. If you contributed 7,500 euros, you received a “premium membership” which included a lifetime, daily supply of the Brugse Zot Blond 33 cl format and 18 personalized glasses. All contributors were naturally also invited to the inauguration ceremony. 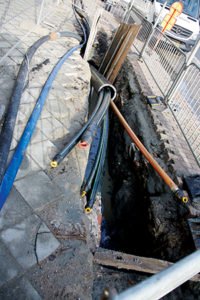 The pipeline is made of food grade tubing.

Now that the pipeline is operational, it delivers 4,000 litres of beer per hour, equivalent to around 12,000 bottles. The pipes generally follow the water supply network and are buried around two metres below the surface.

This is apparently the first known beverage pipeline of this type in the world. In addition to reducing the number of trucks on the road, this project will no doubt be good publicity for Bruges, De Halve Mann Brewery and Belgian beer in general.

During the construction, it was rumoured that some citizens of Bruges were thinking of digging to tap into the pipeline and get a direct supply of free beer into the house, but these are only rumours and no such incident has been reported…so far!