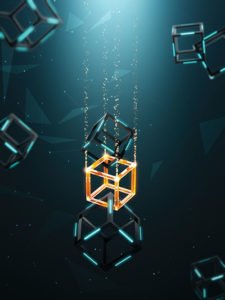 Blockchain is gaining traction in logistics operations, with many organizations jumping on the bandwagon. But will it have an application for distribution operations? Does it have any use in warehousing?

The technology was invented in 2008 to securely track bitcoin crypto-currency transactions. Fast forward to 2018, and blockchain has spread into all sorts of transactions. This is no surprise, because it allows collective veriﬁcation of all details relating to every transaction, providing all parties involved with “a huge degree of traceability, security and speed,” says global accounting ﬁrm Deloitte.

In the logistics realm, picture a blockchain as an ethereal ledger, one that travels along with a given widget from the factory to the truck, train or ship to the distribution centre, to the delivery truck, to the post ofﬁce or store, and on to the ﬁnal destination. Every time the widget changes hands, the details – date, time, parties involved and so on – are added to the ledger. As this ledger is updated, identical copies of it at all points in the supply chain (the blocks in this distributed ledger chain) are also updated. All parties are aware of updates as they occur, and have to sign-off on (or at least can closely scrutinize) changes requested by any party to past updates.

What it can do

In the supply chain blockchains can be applied to any multi-step transaction, enabling not only traceability and secure information handling, but also ease of vendor management, loss prevention and more. “The supply chain is a notable use case where blockchain can be leveraged to manage and sign contracts and audit product provenance,” states Deloitte. It adds that “as the digital and physical worlds converge, the practical applications of blockchain will only grow.”

Gavin Parnell, director of consultancy Go Supply Chain, suggests blockchain may confer four advantages in supply chain transactions: more accurate and faster tracking of both products and the distribution assets that handle them; reduced errors on trade-related documentation; real-time information sharing about process improvements; and, a permanent audit trail that will reduce opening for fraudulent activity.

“Letters of credit, billing information, delivery routes – this information can be coded into smart contracts and then used to trigger actions and include new participants (banks, delivery ﬁrms and so on) later down the line,” she explains.

Blockchain’s ultimate overall value rests in the security and visibility it provides to shippers and manufacturers. “With so many companies involved in the manufacturing, warehousing and transportation process, fraud is always a possibility,” says Kristi Montgomery, Kenco Logistics’s vice-president of innovation.

“There are currently no standards or regulations for blockchain in the supply chain, and logistics competitors need assurances that a standard is in place to protect their intellectual property. Blockchain has potential to allow for increased security throughout all touch points in the supply chain, but the industry needs to be able to move forward with a cohesive understanding of, ﬁrst, a set of standards for implementation, and second, the necessity for transparency and collaboration that comes along with blockchain.”

That’s why Kenco Logistics has joined the Blockchain in Transport Alliance (BiTA), a forum with the goals of developing blockchain standards, educating the market on blockchain applications and encouraging its use.

In late March, Purolator also joined BiTA, stating that it did so because, as a leader in the Canadian logistics market, it wants to help shape the future of the sector.

“The applications for blockchain are endless and will provide the shipping and logistics industry with never-seen-before beneﬁts,” Ricardo Costa, Purolator’s vice-president and chief information ofﬁcer stated at the time. Purolator wants to see how blockchain can help it improve shipment visibility, agility and delivery speed, as well as provide assistance in exploring opportunities to globalize its products and services.

Montgomery notes blockchain may be able to minimize redundancy in inventory control. “By centralizing data on the products [a blockchain] is tracking, less time can be spent ensuring each product is accounted for,” she explains. “It will also allow for more global visibility to real-time status of inventory across multiple providers throughout the entire supply chain process.”

Stefan Kukman, CEO of blockchain solutions-provider CargoX, points to another inventory-related use. Once inventory is below a threshold (calculated automatically based on average usage in previous months, for example, perhaps also including periodic/seasonal factors), a blockchain contract can automatically initiate new orders through appropriate vendors and enable automatic payment in due course.

“The beauty of smart contracts is their extensibility and programmability,” he says. “For example, importers or other businesses could automate ordering to take into account price fluctuation on the producer’s side, and order when a product is in low demand and is cheaper, for example. Third-party logistics providers could be selected automatically, depending on pre-selected factors like route, speed, price, or mode of transport.”

Similarly, Kukman says truckers and others can be included automatically in blockchain systems once their services are required via Internet-enabled devices to share cargo location and other critical information. He adds that “by the time blockchain is widely adopted, we will have made many improvements in AI and autonomous driving…This has huge implications in terms of driving down costs and ﬁnding instant optimizations in a complex system where human operator input alone isn’t sufﬁcient.”

Although blockchain is poised to provide many beneﬁts, Kukman believes its large-scale realization within the supply chain will take some time, occurring only when a regulatory framework exists to support it. In his view, blockchain will mostly be used in the near-term to optimize internal or unregulated processes in small parts of the supply chain.

“We’ll see private transactions ﬁrst,” he predicts, “with Customs agencies and other government bodies signing on later in the game. Later on, as adoption picks up and consensus builds around blockchain standards, we will see this technology expand into all parts of the supply chain, including handling of ﬁnancial flows and on-chain settlements, and more complex end-to-end solutions.”