Christie Lites sets the stage for growth with vertical storage 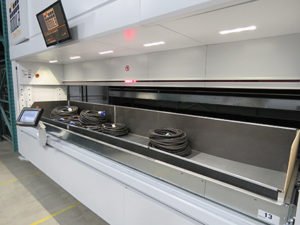 Distribution centres aren’t typically in the central parts of major cities, but the Christie Lites facility in Toronto is far from typical in many ways.

The company provides stage lighting – and lighting only – to theatrical and musical productions from its locations in the UK, all over the U.S. and in Toronto, Vancouver, Calgary, Ottawa and Winnipeg.

Because it’s a rental model, the product Christie Lites moves into and out of its warehouse will eventually be returned to storage. Inventory includes lights, cabling, trusses, and all the pieces needed to stage the lighting for major shows – rock concerts, stage productions, special events, you name it. In all, they store about 4,000 lines in, covering about three million individual assets.

Speed is critical. “We’re a very different kind of a model from a distribution centre – we can’t be late. We are NOT late,” says Dan Souwand, who is vice-president of equipment, systems, and warehousing for Christie Lites, North America.

In his time with the company since 1991 he recalls only two late deliveries, and the company was not able to bill for them because “we’re always the first ones in and the last ones out, because we’re doing the rigging and all the support. If you’ve got 100 union guys waiting on a loading dock to start working on a show, and we’re late, we’re holding everybody up. Late just isn’t in our vocabulary.”

Business is seasonal and spiky, with volumes as high as 30 trailers in a day, right down to a single courier box. Big holidays, like Canada Day celebrations, mean a huge spike in business followed by a couple days when the all the kit from various shows is returned. 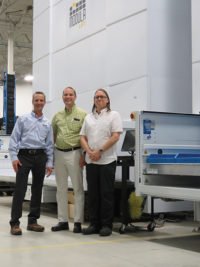 To manage the ebb and flow, Christie Lites has 20 full-time staff in the warehouse. At busy times that burgeons to over 70 working on the floor, including clients who do some of their assembly work in the facility’s dedicated prep area.

Everything is boxed to a standard, says Souwand. “When you’re doing a concert or a very fast-deployed show, the guys that are actually putting it together on-site will come and pre-label wires and parts, so when they get on site, they can just plug the right ones in together. There’s no thinking.”

The 45,000-square-foot Toronto facility, which is also the 36-year-old company’s head office, is located in a light industrial area on the western fringe of the downtown core, near the confluence of the QEW and 427 highways. It’s unbelievably convenient, allowing the company to easily serve shows in the core – it’s only half an hour away, even with traffic – as well as giving truckers easy access to main arteries to move equipment out of town.

About four years ago, Souwand realized they were running out of space in the Toronto unit. It’s his job to ensure the smooth operation of the DC as well as to manage the company’s real estate.

But moving was not an option with the cost of real estate in the city, not to mention the logistics of moving a head office. “Last time we renewed our lease, we looked as far out as Milton and Hamilton,” he says. “At that point, when you start looking at the cost to get into the city, and our client-base that don’t want to go to Hamilton to prep a show, being close to a city is really, really important to us.”

So he started scouting around for a way to maximize the cube of the warehouse. “We didn’t have a lot of floor space, but we had a lot of air that we weren’t using,” he says.

As well, because of the constant return requirements of the business, “finding a machine that actually allowed us to restock very quickly was one of the high points on the need list.”

His research brought him to the idea of vertical storage and Modula, which makes vertical lift modules.

After seeing Modula products in action at ProMat, Souwand was impressed. “Whoever actually came up with the initial idea, they deserve mad props,” he says.

Here’s where Carlo Isetta and Kevin Pearce come into the story. Isetta is a regional storage specialist with Swiss Instruments Limited, and Pearce is Modula Inc.’s regional sales manager, based in Toronto.

After a thorough survey it was decided that cable storage – the cables are various sizes and weights and are awkward and heavy – was the biggest area of need and one where the vertical storage would be practical. Based on the parameters of the various cables, Isetta recommended two ML units that each take up about 150 square feet of floor space and store items in vertical towers 24 feet high (a third was added when space got tight again, two years later).

He went with Modula because it was self-contained, and for the software, he says. The integration with the company’s proprietary WMS was seamless, taking only a week from installation to being completely operational.

When he made the initial purchase decision Souwand opted to try batch picking, but quickly realized it didn’t suit the business model. Because not all the pieces for an order would be stored in the machines, it created a hiccup in the flow. If, for example, there were five different shows being picked they’d find that an item for one would still be inbound from its previous user, holding up the whole process.

Once he realized that this was slowing everything down, Souwand abandoned batch picking and shifted to an order-by-order system. Now orders are organized by the WMS overnight and when the operator starts work in the morning he’ll enter an order number and the machine starts working, delivering the trays in the order they want the product packaged. 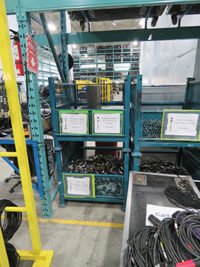 The old way of storing cables at Christie Lites.

Before the Modula units were installed, picking was completely manual. Operators would walk the aisles with a pick sheet and it was up to them to know how organize the items into the shipping cases. Because the inventory would make it onto an order sheet in the order it’s listed, not in the order it needed to be packed, the process was cumbersome and time consuming.

But the Modula software allowed the company to update the asset base with new attributes that let it prioritize picking based on certain attributes. “We could say, ‘okay, pull the longest, heaviest, pieces first, and work the way up to the lightest ones’. And then that would cycle through the different product lines that we have,” Souwand notes. It allows the order pickers to build an order in a way that is efficient for loading.

As well, before the Modula units were installed the cables were stored in wire mesh bins that were stacked five high. That meant, of every five bins, only one of them was actually ergonomically reachable, Souwand recounts. “You either were up a ladder, or basically on your hands and knees pulling product out.”

Aside from implementing goods-to-person picking, which saves time and travel, the Modula units also have the ability to pre-cycle the next drawer into position, so that there’s no waiting between picks. “If the operator is picking from one tray, the elevator’s already gone to get the next tray, and it stages it in the internal bay, and as soon as the operator’s finished with the first tray, the next one is right there,” Pearce says.

“That took our turnaround time and shortened it, so the guys are never waiting for product, or there’s always a tray there, so we’re not losing 15, 20 seconds at a pick, we’re now five seconds between picks,” Souwand adds.

That increased speed has added up to an estimated increase in efficiency of 40 percent in the cable department. “Because we have not added any staff, and our volume has gone up over six years, our throughput’s gone up probably about 50 percent,” Souwand says.

And because the product is presented at the picker’s fingertips there are huge ergonomic benefits. Since the Modula units have been installed Souwand says he hasn’t seen any injuries. “The staff really aren’t having to bend over to pick product anymore; they’re picking it at a waist-level. So from an ergonomic standpoint it’s fantastic. The guys were just getting a little worn, but we haven’t had any back injuries reported since we’ve had the machines.”

Inventory control has also seen a boost with the new system. Previously items were not scanned into storage, but with the new software there’s a double scan in place – on the way in and the way out.

“It just gives us that double-check that our inventory’s 100 percent correct,” Souwand says.

Local sales managers have insight into exactly what’s in storage so they can confidently tell a customer that it will be ready on a short turnaround, if necessary. “That immediacy really helps,” he adds. “We could get a call this morning: ‘Hey, we need to have three trailers at the MTCC (Metro Toronto Convention Centre) tomorrow morning, can you do it?’ We regularly do.”

Part of the deal for the storage units was a maintenance program, which entails regular annual preventative checkups for each unit. Since they’ve been installed the units have had zero downtime. “That to me is the pot of gold,” Souwand says. “Because we can’t be late.”

Reliance on the units means the company has a plan in place to bring in generators in the event of a power failure to ensure cables can be retrieved from the units. So far they haven’t had to use it.

“Most of our marketing is our warehouses. Because our clients come into our distribution centres and see it, we really have to be on top of making ourselves presentable.”

Clients who visit and see the Modula units are impressed, he says. “They go ‘Wow, it’s organized, it’s clean.’ So when we have a promoter or a purchaser from one of the big companies come in, our sales reps can say, ‘Hey, if we’re this good in our warehouse, just think what we can do out on show site for you. I can tell you exactly where this piece of cable is in my inventory system.’”

Even with all the benefits that Christie Lites has realized by going vertical, Souwand is still looking for improvements. At the moment they are still working on barcoding inventory, a process that leaves them wrestling with how much detail they actually need.

“How far down do you barcode something that’s a rental?” Souwand asks. If a $3 piece costs 50 cents to barcode it, and then every time it’s scanned it costs another three cents, is it worth it?

“If that piece doesn’t show up on a show site, that could cost me $50,000. So what’s your cost-benefit off of equipment tracking?” He recounts having to put an employee on a plane with a bag full of three-cent truss pins that had been left out of a shipment. Nothing could be built without them. If they had been barcoded and part of an order they would not have been forgotten.

With the Modula units coming in at a four-year ROI, inside Souwand’s stipulated five-year payback window, and with a projected life of at least 20 years, the Toronto DC is set for a long run. But business is booming, and although he just finished moving the company’s Las Vegas DC into a larger space, Souwand has his eyes on more vertical storage.

“When I hit the same volume and space limitations we had here, or speed limitations that we started having here, Vegas is actually lined up and designed to take nine machines,” he says.

The show must go on.