Blum Canada invests in automation for the long haul 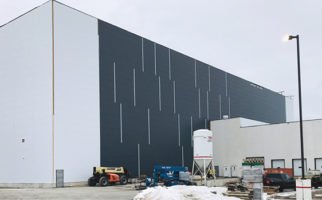 Blum Canada's Kevin Tratt calls the new building a "monster" because it is so imposing.

In 1952 when Julius Blum started making horseshoe studs in Austria, modular cabinets didn’t exist, and neither did self-supporting automated distribution centres. But almost 70 years later his company has evolved into a sophisticated manufacturer and distributor of hinge systems, drawer runners, lift systems, and the machines that install them, primarily for kitchen cabinets.

And they are building automated distribution centres to keep up with demand. The latest one, in Mississauga, Ontario, will replace a warehouse that Blum Canada has been using since 1987. The company has outgrown the 42,000-square-foot space that’s split between a 20-foot clear standard warehouse and a section of narrow aisle racking.

“We knew we needed the new building because we couldn’t add on to the existing building anymore; we had outgrown the property,” says Kevin Tratt, Blum Canada’s president and general manager. 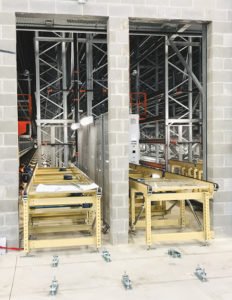 The warehouse will hold about 6,500 pallet locations served by three cranes, each with its own aisle.

The logic of automation

Opting for an automated, high-bay DC was a logical decision for Blum Canada, Tratt says. In Austria, the company has been installing automated warehouses since the late 1980s thanks to the scarcity and high cost of suitable land for building. Now they are in use throughout the company’s global network.

Nonetheless, the Canadian operation spent a few years analyzing the business, the number of SKUs they were handling, and material flows. Tratt estimates that they have about 4,000 SKUs in Canada, with many sizes and packaging types, from small items that would be stored in trays, to palletized products.

Plans for the new DC evolved with the company’s business in Canada. Many of its customers are “larger manufacturers so they want to minimize the amount of packaging that they’re working with. I guess it’s the difference from shopping at Costco, so to speak, versus a regular supermarket,” Tratt says. The shift away from smaller lots to more full-pallet picking made automated pallet picking the logical choice.

When the new building goes live they will still be picking some cartons from full pallets, and returning what’s left back to the warehouse, “which will be a bit of an inconvenience”, Tratt notes. However, the company has a three- to five-year plan to add a small-quantity picking operation once it can identify which items will be exclusively carton shipments or multi-carton, non-pallet shipments.

The new building is 30 metres wide, 90 metres long, and 24 metres tall (98 by 295 by 79 feet). “It’s a monster!” Tratt chuckles. It is completely self-supported, resting on a 1.5-metre-thick concrete pad. The racking was assembled first, followed by the roof and cladding.

Inside, there will be about 6,500 pallet locations served by three cranes, each with its own aisle. There will be one induction point with a transfer cart that delivers the pallet to one of the cranes. For less-than-pallet picks there will be two stations where human operators will pull the cases off the pallets, and one output location for full pallets. When fully operational, the DC will be staffed by two pickers handling the case picks, and two people to load and unload the full pallets.

Finding the right place to put the new DC came down to keeping it close to the existing facility and finding an affordable piece of land the right size. Tratt notes that it was very important to make it possible for staff – who have an average tenure of about 12 to 15 years – to get there via public transit.

He feels they timed the purchase – of 5.2 acres near the confluence of highways 410 and 401 in the Greater Toronto Area – extremely well. “When we made the agreement to buy the land at the end of 2015, it was roughly a million dollars an acre. It’s now four and a half years later, and what I’ve been told is they are selling acreage just up the road from us at two and a half million,” he says.

Finding a piece of property that would give Blum room to grow was key, he says. “We still have about 40 percent of the property left – unused – that we can grow onto when it’s required.”

Although the land was purchased in 2015, it took until the end of 2018 before building began on the site. Getting permits from the City of Mississauga was a challenge, Tratt says. “The Ontario Building Code has no provisions for automated warehouses. They have no clue,” he says. When it comes to how many exit doors you need, for example, it’s all based on staffed warehouses, not automated facilities with almost no people.

It took a lot of time and discussion to eventually get the permits sorted out, and by then Blum was running out of time. In the end they went ahead and poured the slab before the building was permitted, to keep the SSI Schaefer rack installation on time.

“The cost of delaying the construction any longer and losing another construction season far outweighed the cost of any potential fine that we may have been levied by the city, so we made the decision to go. Of course, I think our general contractor was relying on some relationships that he had with the local inspectors in the city, those sorts of things. As it turned out it worked out quite nicely,” Tratt says.

With construction in Ontario shut down mid-April, 2020, Blum’s project was left partially complete. Automation supplier Dematic was pulled off the job with the electrical work left to be finished. Simulations were to take place through the spring months, with product being gradually loaded in as the system was readied for operations.

The original plan was to go live with the new facility just after the Labour Day holiday in September, but Tratt expects at least a month of delay, possibly three. During the shutdown there were weekly video calls to touch base and keep up with any changes in the situation.

A legacy of automation

For Tratt seeing the racking go up and watching the cladding get installed on the outside of the building was exciting. But when the cranes were installed and the magnitude of the project became apparent, “that was the high point” of the construction, he says.

“The next one is going to be when they load and retrieve the first pallet out of that warehouse, even if it’s empty, or full of empty boxes,” he says. “And then when it works, I’ll retire. That’ll be the highest point of all.”