Calgary corrals: Against the grain 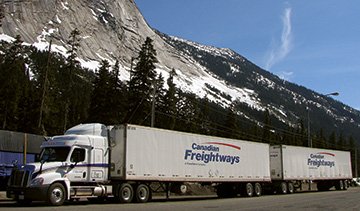 The Calgary Economic Development agency invited a number of reporters and editors, including MM&D‘s Carolyn Gruske, to visit some of the businesses that form the backbone of the city’s warehousing and logistics hub. Articles resulting from that trip will also appear in the January-February issue, and videos will continue to be posted to www.mmdonline.com.

To start with, he said it offers a service most LTL carriers shy away from: residential curbside delivery.

Even odder is Canadian Freightway’s preferred delivery schedule. The company wants customers to take delivery on Saturdays or Sundays.

“Our busiest days for pickups and deliveries are Fridays and Mondays, and on the weekend, we’ve got all our assets sitting there up against a fence. People like to work fewer days rather than more, so we’ll work them Friday to Monday, meaning they’ll get three days off. It may be in the middle of the week, not the end, but I’ll tell you people like three days off, no matter when it is, rather than only two. Now you use the assets you had sitting up against the fence for two days delivering to residents,” said Wettstein.

The company trains its drivers so they know what they’re doing when they exit the cab.

“You need to know if you deliver a fridge inside, before you take that cardboard off, you have to make sure you place that fridge where you’re going to roll it in, as opposed to taking the box off and then trying to turn the wheels on linoleum and scratching everything.”

Another area where Canadian Freightways is attempting to set itself apart is in the area of reverse logistics. Wettstein says he’s working to expand that part of the business, and has even pitched Wal-mart with what he feels is a new approach to the problem.

“We’d like to get more into reverse logistics because it’s one area that still is not being handled well. A good example would be Wal-mart. Wal-mart does a great job of controlling their costs going out to their facilities, but on the reverse it’s not so good.

“On the reverse side, it costs the original vendors to send things back. If you go to a typical Wal-Mart, they have four to six skids per day per store going back to eastern Canada and those all go back as single shipments with UPS. There’s a huge cost to the vendor.

“We’re saying, why don’t we go in and pick up those four skids a day, and move them by rail as one shipment, then we’ll break it down in Toronto, consolidate them and then deliver them back to the customer and save the vendor huge amounts of dollars.”

While other companies bemoan the shortage of truckers and qualified workers, Wettstein says that’s not something Canadian Freightways encounters. He says he has no problems recruiting and retaining staff and attributes that to the fact he’s willing to reward them for doing their jobs well.

As an example he talked about the company’s weights and measures programs. He said that during a discussion with other executives in the network the topic came up about how much the companies could save by properly cubing or scaling freight from customers. (This is a process where shipments are checked by transport company employees to ensure their sizes and weights, as listed by the shipper, are accurate. That way the trucking company avoids being underpaid if it has to haul a 500lb item listed as 300lbs.)

One company saved $1.8 million, just expecting their employees to find discrepancies. A second saved $3.6 million. It had a team of six dedicated people.

“So then we looked at ours. We picked up $11 million and paid back $365,000 to our employees,” adding that “whatever they gain, we give them $1.50 minimum per shipment where there’s an actual revenue gain of more than $10 and then we give them a percentage of everything over that.”

“It never hurts to give a little bit more,” said Wettstein