Robots take the lead in the evolution of DC operations

Kiva Systems was one of the first to bring robots to the order picking process, seen here at Think Logistics in Vaughan, Ontario (see sidebar “Flashback” for more details). Amazon purchased Kiva in 2012, and now uses the orange bots in its DCs, rebranded as Amazon Robotics. (Credit: Roger Yip)

Disruptive technologies are changing supply chain operations, and robots are leading the way.

This theme has become prevailing wisdom over the past couple of years, particularly since the 2012 acquisition of Kiva by Amazon. Those little orange bots grabbed the materials handling world’s attention when the giant online retailer saw their potential for DC operations. (Read the MM&D feature about Kiva here.)

According to the 2016 MHI Annual Industry Report, adoption of robotics is expected to rise to 74 percent in material handling applications over the next six to 10 years. Adoption, at present, is reported at 35 percent by the study’s 900 respondents.

Not only are robotic applications growing, they are moving into completely new areas as technology advances and improves their abilities.

The more agile and responsive to external stimuli robots become, the more useful they are in environments where they need to interact with human workers. As well, in a distribution centre environment, where the majority of tasks are repetitive, simple and often physically demanding, the advantages of a tireless worker who won’t get bored are clear to see.

As the  MHI report points out, “Robots are increasingly able to demonstrate ‘human’ capabilities and traits such as sensing, dexterity, memory, and trainability. They are being integrated into supply chains, taking on more human-oriented tasks, including picking and packaging, testing or inspecting products, and assembling electronics.”

That’s why 51 percent of those surveyed for the MHI study believe robotics and automation have the potential to either “create competitive advantage or be a disruptive force in their industry”.

As the capability for “mobility, vision guidance and control software evolves, so does the ability of robots to function in more dynamic and unstructured environments,” says a recent whitepaper by Intelligrated.

Calling it a new frontier, Intelligrated believes that the next generation of robots will be able to perform “unpredictable, inexact, not always repeatable tasks, and require a higher degree of spatial and object awareness.”

The key will be the development of adaptive control algorithms that will enable the robots to react to their environment in real-time. This technology already exists, and was on display at the most recent Modex show in Atlanta this April.

Swisslog demonstrated that it’s indeed possible to have a human and robot work side by side without putting the person in danger. Its item-picking robotic arm comes to a stop if it detects something in its way.

Likewise, smart autonomous vehicles are able to see their way around in distribution centres, and know not to run into things or people.

The growing sophistication of mobile robotic applications and their ability to mimic human actions, along with their interactive capability, has gained picking and autonomous robots much of the attention now being showered on the technology, but there is more. Automated storage and retrieval systems (AS/RS) are also growing in sophistication, driven by e-commerce demand. 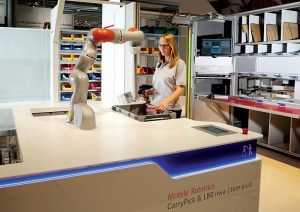 Swisslog demonstrated
the compatibility
of its robotic picker and human workers
at Modex.
(Credit: Swisslog)

Swisslog recently won a prize for the technology it showed at Modex this year—the Automated Item Pick (AIP) system that integrates a KUKA lightweight robot (LBR iiwa), with automated goods-to-person warehouse systems. The robotic arm—equipped with state-of-the-art sensor technology and a seven-axis gripper—is able to assist human workers with picking tasks without the need for a barrier or fence between human and machine.

The robot can be used for different tasks and is designed to work with a human to optimize processes. The robot picks the items that it is able to pick—which can be 30 to 60 percent of the customer’s product range—and a person finishes the order. The robot will stop if it senses it will bump someone, and can be operated in collaborative mode—slower—or in fast picking mode if extra safety measures are implemented.

Vision
Sight used to be the preserve of human workers, but now technology has advanced to allow robots that will be able to “see” to pick from among similar items. This means that product or raw materials won’t have to be as carefully sorted for presentation to the robotic worker.

Likewise, vision is ramping up the game for autonomous vehicles in the distribution centre. Kitchener, Ontario-based OTTO Motors, a spin-off from Clearpath, makes an autonomous vehicle for DC and industrial use, called OTTO.

The company recently won a prize (see page 15) for the OTTO 1500, the larger of its two self-driving vehicles. The smaller OTTO 100 is intended to provide light load delivery in congested spaces such as DCs. 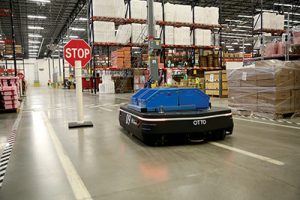 Clearpath’s OTTO 1500 has been selected by GE Healthcare to deliver items in its repair facility. (Credit: Clearpath)

OTTO does not rely on external infrastructure for navigation—like guides or beacons—as earlier AGVs did. This makes it as easy as taking it on a tour of the DC to set up, and making it a readily scalable system. OTTO 100 can provide autonomous transport of up to 220-pound loads at speeds up to 4.5 mph, selecting efficient pathways and avoiding collisions.

OTTO was recently selected by GE Healthcare to automate just-in-time parts delivery in a repair facility being expanded near Milwaukee, Wisconsin. The fleet of OTTO self-driving vehicles will be used to load and deliver parts to work cells for repair. Once the parts are fixed, OTTO will dispatch materials to shipping for return to customers.

There are several other companies making autonomous robots to help with order picking. Locus Robotics and Fetch Robotics both offer a semi-intelligent mobile platform that pairs with warehouse pickers to help gather—and carry—orders.

Flight
Drones are another type of robotic application that may soon find a home in the warehouse. Their ability to leverage the empty space above a congested DC floor may offer significant benefits for order picking and inventory control.

In the meantime, most of the drone development that’s been made public now centres on last-mile delivery and delivery to remote locations such as for disaster relief. 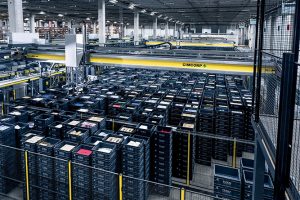 The Cimcorp shuttle system uses robotics to allow very dense storage and automated retrieval. (Credit: Cimcorp)Some of the first automation to gain traction in DCs was AS/RS (automated storage and retrieval systems) technology. These have been in use for forty-plus years now.But with advances in controls technology, shuttle AS/RS systems are burgeoning, and now have the capability to perform much more complex sequencing and storage operations. They can pack more into less space, and retrieve it faster with less labour.

By delivering the goods to the picker, they save employees’ time spent traveling and also have computing power to sequence product flow to meet fluctuations in demand. Intelligrated claims new shuttle systems can achieve throughput that tops other kinds of AS/RS systems by five to 10 percent. The new breed of shuttles are also modular and can be coupled together with relative ease to adapt to growing demand.

When to buy
MHI, in its report, suggests a cautious approach to adoption. Robotics are not viable in every kind of operation. You need to have a clear understanding of how the technology will contribute to the bottom line.

According to Intelligrated, there are choke points in DC operations caused by the amount of traffic on the floor. “At about 3,000 orders per hour, operations hit a tipping point in which foot traffic clogs thoroughfares and operations hit a productivity plateau,” the integrator said in a recent whitepaper.

It’s at that point you need to consider your options.

To implement a system such as an AS/RS shuttle, annual sales in the range of $US50 million are needed to justify it operationally. In that case, ROI can be as fast as two years.

Swisslog says that costs per pick are significantly lower with its Automated Item Pick system, and return on investment can be realized in three to five years.

OTTO Motors claims an ROI of 18 to 24 months, and provides an ROI calculator on its website that takes into account the number of material transport personnel operating and for how many hours a year, along with the hourly rate of pay.

Truly a disrupter?
As with any new technology there are risks in being an early adopter, and also rewards. The disruptive kid at school is often in trouble, but also is often a bored genius just looking for a proper outlet.

Robotics technologies can be seen the same way. Considered disrupters now, because they are forcing us to consider new ways of doing old tasks, in the near future robotics will likely be the norm, and will hopefully have ushered us into a new era of DC operations.