Cannabis across Canada as legalization looms 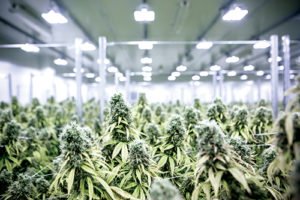 Recreational cannabis becomes legal in Canada this October. That means supply chains for distributing this product across the country are gearing up.

But not all are created equal. Provincial and territorial distribution strategies vary widely, with some jurisdictions allowing distribution and sales by licenced producers (LPs) and some retaining complete or partial control.

The newly elected Ontario government announced in August that it will introduce a government-run online cannabis retail channel in October and will allow recreational cannabis to be sold in private stores by April 1, 2019. It’s a rather big change from the previous government’s plan to have government-run online and in-store sales. This has no doubt caused very busy times for the ‘Ontario Cannabis Store’ (OCS) and the LCBO (Liquor Control Board of Ontario), which oversees it, and neither have responded to questions about cannabis distribution challenges.

Meanwhile, the OCS will be the sole supplier of recreational cannabis online in the province, starting in October and supplied by 26 LPs.

However, a signiﬁcant cannabis supply chain development emerged in Ontario in late August, announced by the world’s largest cannabis ﬁrm, Canopy Growth. The ﬁrm received a licence for a distribution centre that will serve as its hub for business-to-business, medicinal and recreational distribution across Canada. It will also nearly double its growing capacity at its Smiths Falls location, and add an additional 223,200 square feet of cultivation space at its majority-owned Les Serres Vert Cannabis greenhouse in Mirabel, Quebec. Canopy Growth has over 2.7 million sq.ft. of existing licensed growing capacity, several brands, and a network of licenses for retail stores in some provinces. It is also currently building facilities in other locations as well.

Canopy Growth says the new DC will play a central role in meeting demand for medicinal and recreational cannabis in an efﬁcient and cost-effective manner. The facility is over 80,000 sq. ft., was designed by “distribution industry leaders” and is described by the company as “truly the gold standard with fully automated high-speed packing and excise stamp labelling lines.”

When asked if the DC is being put in place because the new Ontario premier is going to allow privately-run cannabis stores in that province, Canopy Growth spokesperson Carly Pickett responds with a deﬁnite no. “The DC has always been in our plans because other provinces are planning private stores and it is also needed to better manage the medical side of things and online sales,” she explains. “But we deﬁnitely feel that Ontario having private retail stores is a good idea.”

Deciding to locate the DC at the ﬁrm’s Smith Falls headquarters was an easy one for Canopy Growth. “We want to give back to a community that supported us from the start,” notes Pickett. “The community welcomed us with open arms in 2014 when most communities didn’t want anything to do with cannabis. So, it felt right to put it here. We have ofﬁces in big cities like Toronto, but the centre of the company is here.”

Canopy Growth currently has 750 employees in Smiths Falls, and is currently hiring 2,500 more workers this year across Canada, mostly in the eastern Ontario town. It’s 30 to 40 people every week,” says Pickett. “We mostly hire through our website. There are positions in every kind of role.” That includes stafﬁng for a brand new visitors’ centre in Smiths Falls that opened to the public on August 25th, which, even in its ﬁrst few days hosted several tour buses.

The town of Smiths Falls is delighted to be adding a huge new cannabis DC. Chief administrative officer Malcolm Morris notes his community has the land, transportation network and utility capacity to support Canopy Growth’s rapidly-growing needs. “Smiths Falls is strategically located in the centre of Canada’s largest markets of Ottawa, Toronto and Montreal,” he says. “We have an extensive transportation network with convenient ground transport options and easy access to the 401, 416, 417 and Highway 7. We are a hub within the national rail network with both passenger and freight service.”

He adds that Smiths Falls has an airport with a 4,000-foot runway, and that the community is also a “mere 45-minute drive” to Ottawa International Airport. 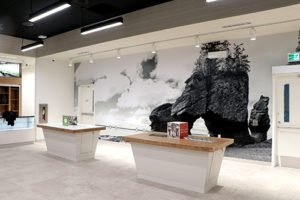 Cannabis NB will run 20 stores across the province.

Quebec, New Brunswick and PEI for example, are having their liquor commissions manage online sales and dedicated retail stores.
It’s a similar scenario in Nova Scotia, but cannabis will be sold in stores alongside alcohol. Yukon has conﬁrmed it will use a public/private model for store and online sales, with governmental distribution. Saskatchewan is allowing private online and retail stores. Alberta will allow dedicated private cannabis stores, but online sales will be managed by its gaming and liquor commission.
BC’s cannabis supply chain will be similar, but cannabis sold in any private store will be purchased from LPs, stored and distributed to stores by the B.C. Liquor Distribution Branch (BCLDB). Stores will report their inventory to the agency every month. So far, the BCLDB has signed memoranda of understanding with 31 LPs.

In Manitoba, stores and online sales will be private, but both will be overseen by the Manitoba Liquor & Lotteries Corporation. Susan Harrison with that agency’s communications and corporate affairs department says her agency will track product sales and “will work with the supply chain to acquire, maintain and report on the required records. We are also implementing an audit program to verify inventory movement throughout the supply chain.”

In New Brunswick, crown corporation Cannabis NB will run 20 stores. When asked why distribution is better handled by this agency instead of private ﬁrms, spokesman Mark Barbour notes the Cannabis NB planning team has spent a great deal of time in the development of supply chain systems and processes that will mitigate risk.

“We’ve worked with qualiﬁed partners to assess and determine our approach and we have been closely following recommendations and requirements put forward by Health Canada,” he explains. “In terms of how this is handled, it comes down to the time and thought any retailer puts into the systems and processes they put in place. We cannot comment on how private ﬁrms are handling this – we can only speak to the fact that we are comfortable with our approach and our processes, and that they will be consistent across all our locations.”

Cannabis NB also cannot share speciﬁcs on its supply chain processes, as Barbour notes that might undermine their effectiveness.

However, in the view of Dan Sutton, managing director at Vancouver-based cannabis producer Tantalus Labs, private ﬁrms should alone handle cannabis chain of custody as they’ve solved the challenges of security and more long ago. “Seed-to-sale software, shipping with tracking numbers and tight inventory management standards are demonstrably robust LP obligations, and function perfectly in Canada and other jurisdictions,” he explains. “Distribution monopolies are a novel experiment and will inherently be throttled by the pace of government. There are no public health and safety advantages to monopoly distribution. Industry has proven they have this handled.”

Sutton also has concerns about whether large and smaller LPs will be treated fairly in government distribution models because sales agreements are likely to hinge on volume and price – mechanisms that favour larger producers. However, for his part, Barbour in NB does not necessarily think that centralized provincial governmental distribution jeopardizes the competitiveness of smaller cannabis producers or new industry entrants.

“All retailers need to work with LPs to prepare what we believe will be a solid portfolio offering good options for legalization on October 17th,” he says. “It is true most of the producers who are currently licensed tend to be larger; however, after legalization, customers’ preferences will drive portfolio evolution.”

As to whether anything learned from the distribution and storage of alcohol can be applied to the cannabis supply chain, Barbour reports that while Cannabis NB certainly looked at alcohol-related processes and systems as a starting point, it recognizes that cannabis is a very different product, not only in terms of physical attributes like size, weight and packaging, but also in terms of regulation, public understanding and so on. While Cannabis NB has beneﬁted from the New Brunswick Liquor Corporation’s experience with controlled substances, he says most of the processes and systems related to cannabis have been developed to recognize the differences.