Expanding in the cold 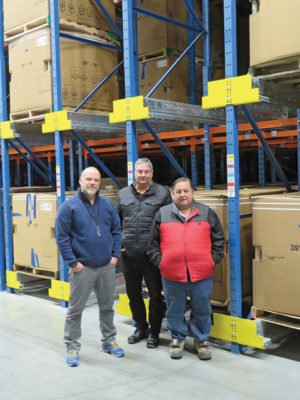 Inside the newest Ontario Refrigerated Services (ORS) warehouse in Woodstock, Ontario you are surrounded by a cornucopia of fruits, vegetables and other farm products. But you’d never know it.
Inside the deep freeze, at minus 23 Celsius, this spotlessly clean facility is as quiet as a winter wheat field, colder than an ice cube. Densely packed racking is loaded with pallets that bear little clue as to their contents.

A lone operator uses an Aisle-Master articulated reach stacker (made by CombiLift) to place palletized bulk cartons of frozen produce atop the highest rack. As the load rises to 35 feet in the air, the warehouse’s secret weapon whirrs into view. It’s a Pallet Runner, poised to receive its next load.

The automated cart runs on rails in the racking. When called by the forklift operator using RF signals, it will be waiting at the load-in face for the massive crate of veggies. As the operator leaves the palletized box in place, the Pallet Runner slips underneath it, centres itself along the stringers using a laser eye, and then the sides lift a couple inches to carry the massive load deep into the racking to the next free pallet position. 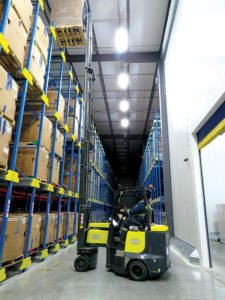 Up and away: Loading the top level of the racking. The Pallet Runner is waiting out of sight to move this pallet back into the rack. (Photo: Emily Atkins)

The Pallet Runner system has allowed ORS to pack more into its chilly cube. At the Woodstock facility (the company has other sites in nearby Ingersoll, Ontario) two identical 32,000-square-foot freezers sit side by side, with a third, cooler room at one end. On one side of each freezer segment the racking is twenty-four pallet positions deep and on the other it’s nine.

This kind of density could not be achieved without automation. “Space utilization was the biggest reason for it,” says Roger Kropf, ORS’s founder and owner. “There were a lot more pallets that we could create space for when you eliminated all the drive-in aisles. It gave us a density that was hard to ignore, really.”

By implementing the Pallet Runner system, the warehouse gained 7,000 pallet positions over a pushback or drive-in rack configuration. Each row in the racking accommodates an entire truckload, and it’s impossible to get to the back of the racking without the Pallet Runner. The nature of the deep-freeze product means that last-in-first-out (LIFO) inventory control works just fine.

Brian Keck, owner of Madzo, the material handling consultant who has had a long relationship working with ORS on its buildings, recounts how they tried various different configurations before they settled on the Pallet Runner system. They considered drive-in or pushback racking, but “we were trying to do six-deep and there was no forklift that could do it. So we would have lost the whole top level of storage,” he says. 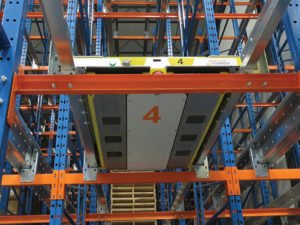 A Pallet Runner cart is at the ready to fetch and deliver pallets in the ORS cooler section. (Photo: Emily Atkins)

It wasn’t an easy sell, however. General manager Albi Biancini was dubious after having encounters with similar – but unreliable – technology in a previous job. So, on the recommendation of the automation supplier, Automha’s Fred Grafe, Biancini and Kropf made the drive to Chicago to see a system in action in a freezer.

“Once we spent the day with the owner of that company, and he explained how reliable the equipment was, and how easy it was to maintain, we decided that we had to go with the racking to utilize the space at it’s full capacity,” Biancini says.

Now ORS has four Pallet Runner carts for the 100,000 square foot Woodstock building. Three serve the deep freeze areas and one stays out in the cooler. 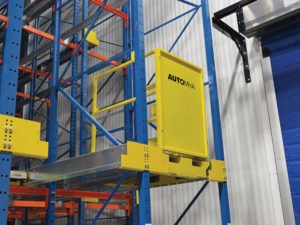 A maintenance platform allows human access to the deep recesses of the racking in case or problems or for routine checks. (Photo: Emily Atkins)

Keck notes: “The carts never come out of the freezer. You just leave them in all the time. What you do is you put a warming pack in them while they are not being used.”

They are easily moved by forklift from one rack to the next, and magnets on the bottom help them stick securely to the forks. Batteries recharge in about five hours. ORS has been using the system for about six months, since it opened the Woodstock warehouse in 2017.

Biancini is pleased. Because they are new to the system they are holding the Pallet Runners back to 80 percent of maximum speed.

“We don’t want the carts running at full speed until we’re comfortable with the product we’re putting on it, and the pallets,” he notes. “The biggest learning curve is the quality of the pallet. So if the pallet is missing a board, the system seems to error-out a little bit more than it would on a perfect pallet. It’s looking for wood, looking for the stringers to inform it where it is.”

Keck adds that this means they are putting a little more pressure on pallet suppliers to get better quality.

But on the whole, the technology is deemed a win. Biancini notes that the carts mean they can get by with four fewer staff (and there are only five in the Woodstock warehouse). 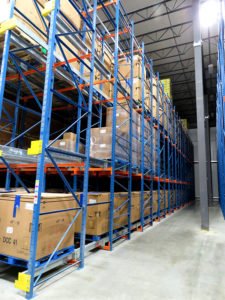 “It cuts down on travel time, it’s a very short distance from dock to rack. It’s really an efficient system from a manpower perspective,” he says. “You don’t have to pick orders until the truck arrives, because essentially the product is staged for you, waiting for it to be removed from the racking. All the traveling is done by the cart, not by the employee. It cuts down on wear and tear on the actual material handling equipment as well.”

Customer demand has long been the driver of growth at ORS. Kropf started the company in 2003 in Ingersoll with his wife Kate and one other employee in a 32,000-square-foot building. Now the company boasts three buildings and more than 70 employees, with more to come.

ORS’s roughly 23 customers range from large multinationals with name brand recognition to smaller local firms. After starting with vegetables in 2003, the company now handles meat products as well. About 10 percent of the product is for export to the US, while up to 20 percent can be import product from the US, depending on the type of crop year, Biancini says.

Expansion is Kropf’s modus operandi and vision. He admits that he is more of a visionary, a builder, than a warehousing guy, which is why he recently hired Biancini to take over as general manager.

“As we were growing rapidly, we got to a point where it was a bit of a leveling out thing, and my wife said, ‘It’s time you come in and run this warehouse right.’ Well, I’m not a warehouse operator,” Kropf says with a sigh. “It was a number of years where I wasn’t excited about what I was doing, until I got back into building more projects.”

In addition to building out his Ingersoll facilities, using his own teams to do the contracting work, Kropf also installed a massive solar array that powers the cold storage facility as well as returning power to the grid.

With the Woodstock warehouse up and running, Kropf has his sights set on the next project. Coming soon, on an adjacent lot near the 401 highway, will be the company’s latest building, to be built – as usual – in 32,000 square-foot sections.

The plan for now is to make it a freezer warehouse, but, says Biancini, “if someone knocks on the door and says ‘we want 15,000 pallet positions of cooler’, then we would customize the space for the customer.”

“The market is growing faster than the pallet positions are growing,” he adds. “We’re a little further out [from the GTA] than a lot of the big companies are. We’re kind of a niche operator.”

He’s referring not only to ORS’s proximity to the local farmers, but also to the value-added services they offer in Ingersoll. “We’ve got full blast freezers in the other facility and really state-of-the-art tempering rooms. In general, most of our customers either slaughter and we freeze for them, or they pluck the product from the fields and we freeze it. Most of the customers that we temper for are very impressed with our set-up,” Biancini notes.

“It’s not a niche that other third party warehousing uses, or does. It’s a service that other ones don’t touch,” Kropf adds.

With Kropf working on the new Woodstock building, Biancini has been focusing on streamlining operations. The company’s throughput is about 115,000 pallets a year, with a maximum capacity of about 80,000 pallets, a number usually reached around Christmas time.

To improve efficiency, in February 2018 he is introducing an upgraded WMS, with reduced reliance on paper and voice controlled operations coming soon. “The upgrade will allow us to use signature pads, and when a driver signs his paperwork, all that will come out of the printer is paperwork for the driver. Everything else will be stored electronically and the goal will be to eliminate as much paper as we possibly can.”

Beyond that, Biancini says 2018 will be a year to focus on company culture, “making sure we’re treating our people right, and keeping them happy, because the happier they are the more productive they are. I think in the big picture we’re a small family business and we want the environment in the workplace to remain very much a family business.”

Kropf is happy to have the operations manager on board. It allows him to focus on what he likes doing and to fulfill the company’s vision: “We build it, we fill it.”