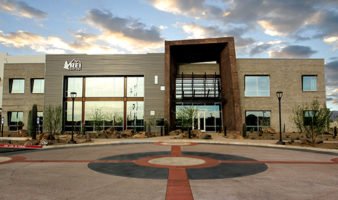 When the largest retail co-op in North America announced plans to build their third major distribution centre in Goodyear, Arizona, just outside of Phoenix, a number of supply chain experts in the fashion, apparel, footwear and accessories industry took notice.

The third REI distribution centre (the others are in Sumner, Washington, and Bedford, Pennsylvania) was to include an unwavering commitment to efﬁciency, sustainability and delivering exceptional service for their owners, members, and the community. It was also going to be a state-of-the-art facility to support e-commerce and delivery direct to stores. In other words, a purpose built, omni-channel facility that would leverage the latest technology and approaches to design, construction, operation and performance.

REI has achieved its goals. The DC was just awarded LEED Platinum status. Less than a year later, it produces more energy than it consumes; in fact it has net negative energy usage and actually returns power to the grid.

The DC produces more energy than it consumes; in fact it has net negative energy usage and actually returns power to the grid.

It is also a model for omni-channel distribution centre design, meeting these requirements with ease while supporting 40 percent of the co-op’s sales—reaching approximately 36 percent of customers and 41 percent of the total retail volume.

History of commitment
Started in 1938, REI (Recreational Equipment, Inc), was founded by 23 mountain-climbing buddies. Since its inception, the company has been committed to its exceptional guarantee of 100 percent customer satisfaction.

As a co-op, REI also delivers an annual rebate to owner/members. In recent years that’s been 10 percent of their purchases. It’s a history of commitment to customers, members and the community at large.

But beyond that, REI’s management team is committed to deliver a new standard for supply chain and distribution centre design and operation at this flagship DC.

“A new standard that was in line with REI values and commitment to sustainable operations”, says to Rick Bingle, REI’s VP supply chain.
REI designed this facility to conserve water and protect the delicate environment of the surrounding Arizona desert. REI chose a non-evaporative cooling system, which keeps temperatures consistent from floor to ceiling while saving millions of gallons of water annually.

The co-op also invested in an innovative restoration project at the Verde River, high in the Phoenix watershed. In partnership with Bonneville Environmental Foundation (BEF) and The Nature Conservancy of Arizona, the project will help modernize irrigation infrastructure to conserve water and enhance flows for recreation and wildlife, protect farmland and limit development and water extraction in sensitive areas, remove invasive plants to restore river habitat, and enhance recreation access at key sites along the river.

And ﬁnally, employees are encouraged to give back to the community, and the company leads by example. Ofﬁce space inside the REI facility is made available for community functions and the company was has been successful in maintaining a low carbon footprint and using as few resources as possible in the operation of the new facility.

Goals
Four goals were established and maintained throughout the design process for the DC:
•    Be true to the REI brand;
•    Adhere to the REI culture and values;
•    Maintain REI’s commitment to  stewardship;
•    Achieve the highest level of sustainability possible.

Facility Design
The overarching challenge was to develop a facility design that was non-traditional. Innovative approaches had to be taken in order to meet both sustainability goals and build an efﬁcient facility that would meet the emerging needs of the omni-channel business model.

During the design process, REI and their team placed signiﬁcant emphasis on renewable energy, water conservation, energy efﬁciency, eco-friendly building features, and recycling. Simultaneously the group was developing a state-of-the-art solution for omni-channel distribution—supporting store stocking, replenishment wholesale distribution and e-commerce requirements—all from within the same facility and the same inventory.

Among the primary goals, the warehouse automation was to achieve “one touch distribution”; to ensure that an order picker could fulﬁll an order from a single location, and at the same time, without having to pick individual orders for store, e-commerce and wholesale distribution channels.

After considerable research and design consultation, the team came to the same conclusion. The ﬁrst step was to implement a disciplined receiving process that ensured all SKUs were placed in the proper location—to ensure picking accuracy could be maintained. Automated technology supplied by the KNAPP shuttle could then deliver SKUs for any order type to a universal workstation that would efﬁciently process orders for each channel. 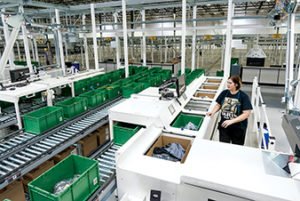 A picking station at REI’s distribution centre in Goodyear, Arizona.

Knapp’s pocket sorter technology was also selected as part of an overall solution—and is the ﬁrst North American system of its kind. It’s a sortation approach that allows picking, staging and sequencing of orders via a unique method.

The pocket sorter has unique characteristics. First, it provides a major reduction in space because of its pocket style design where the item is staged in a hanging pocket after picking and does not take up the space of typical horizontal conveyor accumulation.

Second, its basic design provides for efﬁcient use of building space, allowing multiple levels of order/item accumulation in a small footprint. And third, the sorter can sequence order items to packing or shipping in any sequence due to its unique sortation algorithms and logic.

True to its mission, the team also developed a unique merger of these technologies and worked with Knapp to develop a new order-picking station. The concept, the Pick-it-Easy Multi workstation, is now patented with contributors from the design group, including Rick Bingle. It allows all order types to be picked from a single workstation—a true “one touch distribution”.

REI is very pleased with their new distribution centre. And true to their commitment to core values, community and sustainability, is open to sharing their experience and learnings. The co-op welcomes anyone within the industry or the general public to tour the DC in Goodyear, Arizona to see the facility ﬁrst-hand; interested parties can contact the co-op by emailing sshaeff@rei.com.