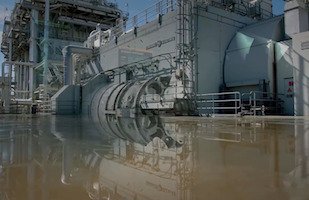 Digital twins have been used in manufacturing for some time already. (GE image)

New technologies have enabled us to replicate the exact characteristics of a physical process, object or facility and test how it will behave under changing conditions or with different parameters. These copies are known as digital twins, and they open the door to cost savings and process improvements without having to put the real item or process at risk, or spend money developing something that turns out to not work.

The introduction of digital twins takes us a step beyond the old-school physical or even computer-aided modeling of the past. Sensors relay information back to sophisticated computing algorithms and machine learning that monitor and replicate the original item in real time, creating the ability to manipulate conditions to fine-tune processes and operating behaviours. They’ve been used in the aerospace and defense realm for years, but the costs and complexity have prevented their adoption in other industries – until now.

Here are five things you need to know about digital twins and their potential application in distribution logistics.

1. Get Ready – the twins are coming

In a report published in 2017 consulting firm Gartner predicted that by 2021, “half of large industrial companies will use digital twins, resulting in those organizations gaining a 10 percent improvement in effectiveness.”

The proliferation of sensors connecting items to the Internet (Internet of Things or IoT) – Gartner’s estimate is that by next year there will be 21 billion of them – means that the data is there, ripe for the picking.

“The market for digital twins is expected to grow more than 38 percent each year, passing the $26 billion mark by 2025,” explained Matthias Heutger, senior vice-president, global head of innovation and commercial development at DHL.

Digital twins have come to warehouse design. Dematic, for example, introduced iQ Virtual earlier this year, and the product has already won two awards. It allows users to explore a proposed system configuration in a virtual environment to see how the system will perform in actual operation. It is “a digital twin of the production environment where extensive testing of the system occurs,” Dematic said.

The model uses graphic-rendering technology to show labour productivity, inventory flow and the efficiency of material handling automation. It also offers a virtual walkthrough of the warehouse using virtual reality.

“iQ Virtual can corroborate that the intralogistics system, execution software and material handling automation will meet the performance expectations of the user,” said Scott Wahl, vice-president of Dematic’s Software Center of Excellence.

Being able to test a system or machine in VR before committing to actual production is an obvious benefit. According to recently released research by DHL, “tests with digital twins can detect clashes between components, assess ergonomics, and simulate product behavior in a wide variety of environments.”

Removing the risk of having to build a system or component before testing means lower development costs, faster time to market, and better reliability in the final, physical entity.

If a virtual distribution centre isn’t complex enough, how about a whole city? The city-state of Singapore has its own digital twin that’s being used to help planners decide when and where infrastructure should be changed, as well as how to manage possible civil emergencies like fires or floods. Singapore’s model is connected to traffic systems, climate data and transport vehicles.

“Cities are some of the most complex ‘products’ created by humanity,” said Bernard Charles, CEO of Dassault Systèmes, which developed Singapore’s digital twin

“Through more efficient and accurate predictions of future experiences within these cities using state-of-the-art tools and applications, we can better anticipate national resource planning or provision of services, and contribute towards a more sustainable quality of life.”

GE has been using digital twin technology for years, and reports numerous benefits. Reliability improvements, reduction in maintenance and the ability to predict system and equipment failures are among the principal benefits GE says its customers achieve using the technology.

“We’ve seen customers increase reliability from 93 percent to 99.49 percent in less than two years, reduce reactive maintenance by 40 percent in less than one year – contributing to significant maintenance cost savings – and save US$360,000 by predicting a power outage in a gas plant,” wrote GE’s Dimitri Volkmann, GE Digital’s thought leader for Industrial Internet of Things, in a blog post.