Pival’s Rob Strub (L) and Kevin Little with some of the 300,000 tires in the warehouse.

You could walk into Pival’s automotive replacement tire distribution centre in Guelph, Ontario, with a blindfold on and instantly know what they store there. The air is redolent of fresh rubber, leaving no doubt about the contents.

The smell is about the only thing that Pival doesn’t control in this specialist space. It’s dedicated almost exclusively to one tire manufacturer’s stock, which the 3PL stores and ships out to dealers.

And while storing and shipping out sound simple, Pival adds value to the process by recording the unique bead identification on every single tire in the building. As they come off the truck the beads are scanned, the packaging is scanned, the tires are labeled, then put away.

Tires have a shelf life, which means that these scans are very important to the manufacturer, enabling more accurate lifecycle tracking and ensuring that inventory moves in the correct order. “We have to manage the date of manufacture on every single tire, the one that’s made the oldest has to get out first,” says Kevin Little, Pival’s vice-president of sales and marketing during a tour of the facility. “And so when you mix it with all the different SKUs that we have, it’s not rocket science, but it’s not easy either.” 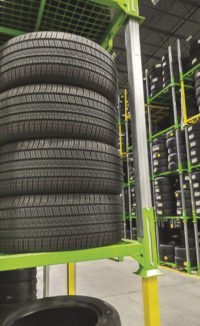 Part of the value Pival adds is sticking the adhesive labels on each tire as it arrives.

The 260,000-square-foot facility opened in April 2019, and holds about 1,700 SKUs representing 300,000 tires. The tires are stored in collapsible racks that stack on one another, which means the DC can be reconfigured very easily. In fact, staff were reconfiguring the storage area on the day we visited, turning two storage locations into one to accommodate a large number of one particular SKU. According to Rob Strub, the warehouse manager, reorganizing allows a much denser cube, with rows 11 deep in places.

The tire business is utterly seasonal, which means big retailers like Costco for example, might send back 10,000 winter tires and order 10,000 summer tires. “It’s a great game,” Strub says, but it’s very serious since the tires that have passed their best-before date (which ranges from 30 to 40 months from manufacture, depending on the manufacturer or customer) must be sold at a discount.

With each tire’s barcode scanned into the WMS, the location of every unit can be pinpointed in the DC. “This is where our WMS is so great and so valuable to us,” Strub says. “We can track every tire, no matter if we move it 50 times during the day. We can’t be selling old tires as new ones.”

To help maximize the building’s utilization Pival sought and won the business of another seasonal client, a lawn fertilizer producer. “We’re making room, because the winter tires are way down. And so we get a seasonal client that comes in, fills up space and then gets out in time for summer. We’re making space to do that, to make every inch of the warehouse paid for,” Little notes.

For the most part the DC operates smoothly. But with 300,000 units moving through the facility twice a month, Strub admits that there can be friction in ensuring that carriers bring loads at the right times. They are scheduled, but when slots get missed, it can mess up the day. “It takes us two and a half hours to unload a trailer and we want the next one right on top of it,” he says.

For outbound tires the WMS creates orders that the TMS organizes into loads, directing the pickers to stage them in the correct order – they are organized by order size and destination to optimize trailer cube and transportation miles. The two systems work in sync to manage up to 200 orders a day.

“It’s mostly automated,” Little says. And then in the early afternoon, “we pull the trigger and electronically send dispatches to all the carriers to come in, what they’re going to have and what docks they’re going to be at.”

Taking advantage of the inventory data it collects on every tire, Pival is developing a mobile app that will allow customers complete visibility into their stock. “They’re going to be able to see where their inventory is and how much they have of each SKU,” Little says. “For now, they’ve got to send an email and wait for an answer. With the app they’ll be able to just look it up.” The app is expected to be ready within a year, he says.

While as a 3PL Pival does a lot more than just manage tire inventories, the company knows its strength. “The fact is, we were born as a tire warehousing company,” Little says. “So for us to get away from it, it’s not logical, actually, because we’re able to generate a certain amount of sales because of that expertise. Why would we walk away from it?”