From pains to gains

When Italpasta brought SSI Schaefer in to install a new automated packaging solution in its plant, the company’s productivity doubled and many more benefits followed. 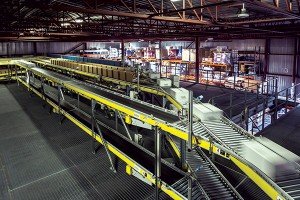 Italpasta is a premium manufacturer of pasta in Canada that has enjoyed continued growth since it was founded in 1989. Today, the company runs like a well-oiled machine from its manufacturing plant on Nuggett Court in Brampton, Ontario.

But this wasn’t always the case. There was a time when an inefficient packaging process caused major problems for the company.

Once the pasta was packaged and placed in cases, all of the cases were handled by an operator—manually building pallets and applying a handwritten label to the finished pallet. Then a forklift driver would pick up the pallet and deliver it to the shrink wrapper before moving it to the shunting area.

And with 21 packaging stations—eight in operation at any given time that needed to be replenished with empty pallets—it was a busy process with operators (at least three at every station) and forklift drivers working near each other in a small, congested area.

“We needed to go to the next step in automation, especially on the packaging side,” says Riccardo Bordignon, Italpasta’s plant manager. “Since our plant was, on the production side, completely automated, the missing connection was the packaging and the palletization system.” 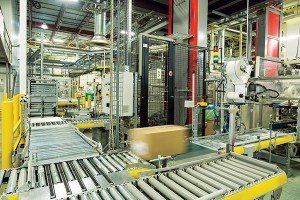 In addition to being a bottleneck, the packaging process opened up the opportunity for increased error, as well as injury, due to the manual lifting and the close proximity of the operators and forklifts. And because empty wood pallets were stored near the production area, food safety was also a concern.

The packaging process needed to be addressed for the company to enjoy continued growth and success. The problem was, the facility’s footprint was too small to accommodate an expanded packaging area, which at the time only accounted for one-third of the company’s production area—too small by industry standards. Italpasta needed more space.

Hello, neighbour
Right next door to Italpasta on Nuggett Court was an office of SSI Schaefer, one of the world’s largest solutions providers and components manufacturers, offering automated systems, storage and distribution, materials handling and logistics software.

SSI Schaefer was only using the office space in its building; its warehouse space was available. The two companies worked out an agreement that would allow Italpasta to use that space for its finished goods holding area (though Italpasta now owns that building).

At the same time, Italpasta determined that SSI Schaefer technology was the best solution to its packaging area bottleneck. The technology would help to automate and restructure the packaging process, move material from one building to the other, and work seamlessly with the current manufacturing process, all with minimal impact on operations. 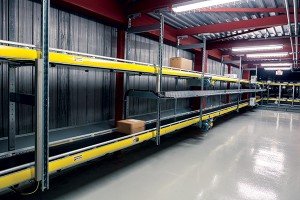 and software—Italpasta had to bridge the manufacturing plant and the finished goods holding area located in the building next door, so the proposed solution could seamlessly extend the packaging process.

Once construction of the 50-foot bridge was completed, two case-conveyor lines were added to connect the 21 lines of packaging to the case buffer area, where Italpasta sorts and stages cases for palletization.

The solution starts on the production side, after the product is boxed and labelled with one of the company’s 750 SKUs. At this point, Schaefer’s software—WAMAS Material Flow Control (MFC) system—reads the barcode of the case, recognizes what its weight is supposed to be, which pallet it will be on, how many cases per layer and how many layers that pallet will be.

The system knows how many cases are available for that particular SKU, and when a preset number is reached, the cases are sent to one of four automated palletizing stations where machines palletize the cartons and auto shrink wrap them, apply SSCC/GS1-128 code labels and prepare them for storage until they are shunted to the distribution centre. 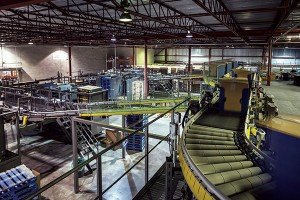 One of the things that attracted Italpasta to this solution was the sophisticated equipment. The conveyors used at Italpasta are Schaefer’s FT+, a lightweight, modular and scalable intelligent bin conveyor system. The majority of them are accumulating roller conveyors.

“Depending on the customer requirements, the conveyor system layout is custom-designed to fit exactly into a project and direct the material flow through the facility,” says Roger Campbell, service manager Canada, for Schaefer System International, Ltd.

The accumulating conveyors act as a small production buffer, allowing Italpasta’s machines to function even if there is a delay in downstream production.

“Should a conveyor line be required to stop due to such a downstream delay, the product carriers will accumulate as closely as possible to bring the product as far away from the upstream feed as feasible; therefore allowing the machines to continue production output for a while,” Campbell explains.

The layout of the conveyors at Italpasta was designed to match the production output of the machines, streamlining the material flow while merging at the right points to avoid producing throughput overcapacity.
A particular challenge SSI Schaefer needed to consider, says Campbell, was the unique quality of the conveyed product—ie, certain pasta, like penne, spreads out quite a bit if it spills. The FT+ roller conveyors are lightweight and do not have many surfaces where product spillage could fall.

With the roller conveyors, if a spill occurs, the majority of products will fall through the conveyor to the floor, where they can be cleaned up. The belt conveyors, however, are sealed, so if a product spill occurs, it conveys the product to the next roller conveyor, where it drops the spilled product to the ground to be cleaned up. The belt on these conveyors does not have sufficient clearance to the plate below, so there is no risk of product getting wedged below the conveyor belt.

Another piece of the high-tech solution is the case palletizers—four of them. These are from VonGAL Palletizers, now Premier Tech Chronos. 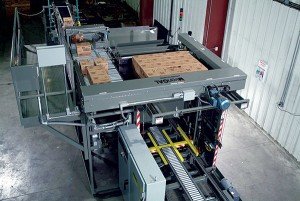 Robert Wallace, client services director with Premier Tech Chronos, was involved with the installation, and says four SPLXMK2 case palletizers were chosen for this application because that model is a “beast that would handle most anything you threw at it.”

The machine, he says, is user-friendly and can handle a wide range of products.

For his part, the challenge of this installation was that two of the palletizers had to be able to handle product that had been rotated on its side. Using a small, mechanical, belt-driven device called an “upender”, the palletizer is able to turn the cases up on end, convey them into the machine, rake them, form a pattern, put them on a pallet and discharge it out of the machine.

The palletizers are designed to handle up to individual layer sizes of 500 pounds, and load weights of 3,000 pounds. For this application, it had to perform at roughly 84 loads per hour—a key requirement the palletizers met with ease.

Another important part of the solution is the WAMAS software, which ties the system together and is able to handle the high speed.

“The most important part of the software is actually the sortation system where every case entering the system is being scanned at quite a high speed,” Bordignon explains. “This system can handle 5,400 cases of finished product per hour…[and] within that speed is able to divert and sort the different product coming in through the conveyor to different buffers, handle the amount of cases at the buffers, control which palletizer to send them to when the preset number of cases for that particular SKU is reached on the buffer, and it handles all of the logistics of the system.”

All this, and it produces reports, too, so the company can get a clear view of its production.

Major gains
Since the project completed in August 2011, Italpasta has seen many benefits. First and foremost, the packaging bottleneck is non-existent.

“We eliminated that bottleneck and we are able to produce more because the efficiency went up,” Bordignon says.

Italpasta has also increased its footprint, which allows them to increase capacity. With the additional space, packaging now accounts for about half of the facility.

Furthermore, by not stopping production to wait for packaging to catch up, peak performance capacity has increased.

In addition, Italpasta reduced 170 person-hours per working week—that’s seven people per shift on a three-shift operation. Bordignon stresses that no one was fired.

The packaging operation historically had a high turnover because it was a difficult job in a fast-paced environment. The company just stopped hiring, and now it’s only the machine operators who work in that area.

And, because the system is automated, turnover has also declined. Another bonus: employee skill level has improved by transitioning from manual labour to more skilled work.

The company has also noticed a drastic reduction in errors now that the packaging operation is automated (though no numbers are available). Cases are no longer put on the wrong pallet, and tags (no longer hand-written) all have the appropriate code for that particular product.

Now that the pallets and the forklifts are in the finished goods holding area, Italpasta has eliminated the company’s earlier employee and food safety concerns, and reduced congestion in the packaging area.

The solution is so efficient—now packaging 5,400 cases per hour—they will be adding three more packaging lines to the palletization system before the end of the year.

The system is an overall success, and provides Italpasta with many additional benefits the team hadn’t even thought of. More than anything, though, the system gives Bordignon confidence that every case of pasta is going where it is supposed to go.

System requirements:
• The proposed solution needed to be turnkey and dynamic.
• It had to meet the company’s current packaging maximum output, plus five years of growth.
• Cases had to be checked for weight and rejected if they didn’t meet a preset value.
• The system had to be able to read and apply information on GS1-128 barcodes.
• The equipment had to be able to accumulate cases from multiple lines to form pallets.
• Only one SKU per production line per shift on a pallet.
• The system must be able to trace from which production line the product was produced.