Jenna Brooks is the CEO of Racked Out, an almost four-year-old pallet racking installation company based in Mississauga, Ontario. Here’s the story of how this dynamic 25-year-old came to be installing racking and growing a business. 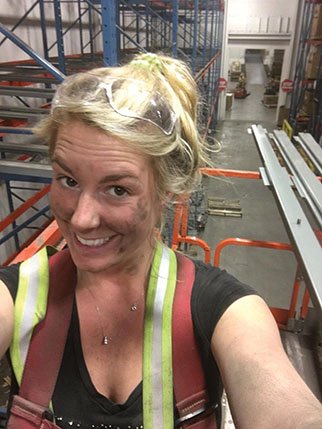 It’s not the typical start to a business, and Jenna Brooks acknowledges that she was simply trying to earn a better wage as a maintenance worker in a warehouse facility when she started working for herself. But once she registered her business and began earning double the money, suddenly the work began to change.

She explains how helping with a racking project led to another one, until: “I became good at it. I don’t even know really what happened from there. We got one job – we went in and tore down a fence. And by word of mouth, we got another job and another job. It was just me and two people, then me and three people, and four people, and five people. And now it’s three and a half years down the road with our business and we’re doing big projects now with lots of people.”

In fact, Racked Out employs 18 people now, and works on up to six or seven projects a week. Clients include FedEx, Menasha, and Nobel, with projects all over southern Ontario.

Behind every great woman

Brooks is quick to credit those who have been instrumental in her success. “Mentors are really key,” she says. “Bill Carter [a well-known figure in Canadian material handling] is a very wonderful person; he’s helped me out a lot. He looks out for me, makes sure that no one is ripping me off. He helped me develop relationships with manufacturers. He’s taught us how to do so many things. He’s a big part of the reason I’m here today.”

She also relies heavily on her office manager Rosa Rosidale to “take care of all the stuff that I can’t take care of.”

As any small business owner knows, there are numerous challenges in getting off the ground and growing. Right now Brooks says, being taken seriously, along with buying power and staffing are her biggest hurdles.

She recalls numerous times when she’s had to fight to even get a quote for rack when she’s bidding on a job. We asked if being a woman is part of the challenge.

“I don’t know if it was because I’m a female. But I was definitely persistent. Now, being a female is giving me an edge in this industry, I’m not going to lie. Maybe we shouldn’t tell my competitors that, but at the end of the day, they’re never going to have the rack that I do, because they’re all men.”

Brooks plays up the feminine, using hot pink as the company’s branding colour. But it’s not just about being a female-owned company. She supports breast cancer research and wants to become involved with helping women in the community. “We can emphasize the pink, just being strong women role models and entrepreneurs in this society,” she says.

And really, at work, “we don’t need to be [physically] strong, because we have forklifts to do the work for us. We can do it. Women can do it.”

Brooks is confident that warehousing is a good long-term prospect. “Once the warehouses are up we’ve got repairing, we’ve got maintaining, upkeep, inspections, support,” she says. “There’s so much more after the fact. It’s not just install, walk away and wash your hands. It’s the servicing part for years afterwards, the residual part.”

Brooks says she succeeds because the company is a lifestyle. “For a period of time, I am – and I have and I will – sacrificing everything in my life to be an entrepreneur. But I love it.”

“I always knew I was going to be successful,” she says.

“I knew I never wanted to start at the bottom. I refused to start at the bottom. But even though I’m at the top of my company, I’m at the bottom of the industry. I’m very small. But you know what, I’m the future. We’re the future. We’re the future because all our competitors, they’re older, and our manufacturers need young entrepreneurs, young installers, young sales girls to keep their company, their manufacturing facilities going strong. And I can’t wait to be queen bee one day – queen of racking!”