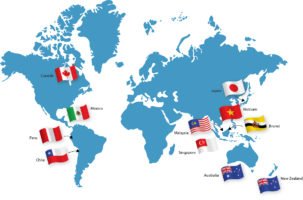 The United States pulled out of the negotiation process when Trump took office and until then, the agreement was referred to as the TPP 12.

Once the CPTPP enters into force, it will be one of the largest free trade agreement in the world, representing 495 million people and a combined GDP of $13.5 trillion, accounting for about 13 percent of the global economy. Before it can be implemented, each member country has to undertake its own domestic ratification process. The agreement will enter into force 60 days after six (or 50 percent) of the signatories have completed their ratification procedures.

Before looking into its content, let’s take a brief look at its history. Many people believe the TPP was started by the United States in their attempt to counter the rising predominance of China in the region. Yet, it had nothing to do with the U.S. at the beginning, as negotiations began as early 2002 between New Zealand, Chile and Singapore. It was then known as the Trans-Pacific Strategic Economic Partnership or P-3, then to become the P4 when Brunei joined in 2005. It was only in 2008 that the US came into the picture. Then Malaysia joined in 2010, Canada in 2012 and Japan in 2013.

The Agreement is expected to generate significant economic benefits for Canada, including access to Japan, the world’s third-largest economy and fast-growing Asian markets like Malaysia and Vietnam. More than three quarters of Canadian agriculture and agri-food products will benefit from immediate duty-free access. Tariffs on meat will be reduced or eliminated within 10 to 15 years, on canola oil within five years, while a number of other products like cranberries, blueberries and pet food will get immediate duty-free access.

For industrial goods and consumer products, 100 percent of tariffs will be eliminated, mostly immediately, or within 10 years, again depending on the country and the category. For example, there are different transition periods for industrial machinery, chemicals and plastics, metals, minerals and cosmetics. Regarding automobiles and automotive parts, a phased tariff elimination has been agreed upon, with variations according to the country.

This leads us to the unusual aspect of this trade agreement, in that it’s not just one big single agreement but it also includes several individual pieces. Aside from the master agreement which applies to all, the full text of which was released on February 21, 2018, with its 30 chapters and numerous annexes, there are a number of side agreements between countries on a range of issues. They are sometimes referred to as side letters or side instruments.

For example, Canada has such agreements with all countries on cultural industries; with most countries on geographic indicators; with Australia on beef, motor vehicles, dairy and food processing; with Chile on agriculture and chemicals; with Japan on standards, forest products and dispute resolution; with Malaysia on motor vehicles and the oil industry; with Mexico on cooperation; with New Zealand on distinctive products, wines and spirits; with Peru on biodiversity; and with Vietnam on e-commerce, labour, patents and trademarks.

New Zealand has other side agreements with Chile, Malaysia, Mexico, Peru and Singapore, and so on. And some countries have tariff rate quotas for certain products, like Vietnam for vehicles, Malaysia for animals, Canada for dairy products, eggs and poultry, Japan for wheat and barley, etc.

Like all trade agreements, the CPTPP contains classic rules of origin built around originating goods, wholly obtained or produced goods, regional value content and further production. Product-specific rules of origin are organized by HS codes and are relatively complex for automotive products, textiles and apparel. There is no specific document required for the origin certification, just minimum data requirements and the certification of origin can apply for a single shipment or multiple shipments of identical goods not exceeding 12 months.

The ‘de minimis’ limit for non-originating materials is 10 percent, similar to CETA, our trade agreement with the European Union, and more liberal than the seven percent under NAFTA. Shipments must be direct, but indirect shipments or trans-shipments, as they are called, are possible as long as the goods don’t undergo any operation or treatment outside the parties and remain under Customs control or in bond in the territory of a non-party country.

The record-keeping requirement period is five years. Claims for preferential treatment and refunds of duties paid can be made up to one year after the date of the original importation.

In addition to the tariff reductions, which is the area of most interest to exporters, manufacturers and importers, the CPTPP contains commitments on standards and regulations, financial services, investment, environmental and labour issues. Certain professional and business visitors will benefit from improved access, but this varies depending on the country.

U.S. president Donald Trump is said to be open to rejoining the TPP, providing it accommodates U.S. demands but it’s not easy to tell how serious this is. In Asia, Thailand, Indonesia, the Philippines, South Korea and Taiwan have been reported to be debating whether to join the pact. The UK Government has floated the idea that it too should join the TPP, which is odd because the UK is nowhere near the Pacific. But this could be explained by a post-Brexit UK being somewhat isolated, it may therefore be eager to join any new trade agreement. China, so far, has remained skeptical of the deal.

Canadian companies must now incorporate the opportunities provided by the CPTPP into their international strategy and be ready to capitalize on them when the agreement comes into effect. The next step now is the ratification process.

How long should this take is a very good question and it’s reasonable to guess that given its complexity and the number of countries involved, it may take a little longer than NAFTA did. That agreement was signed in October 1992 and put into effect in January 1994, a little over a year later. CETA was signed in October 2016 and was provisionally implemented in September 2017, with full implementation still a few months away. Maybe the CPTPP will surprise us and come into effect faster than we think, providing there is enough political will to make it happen.