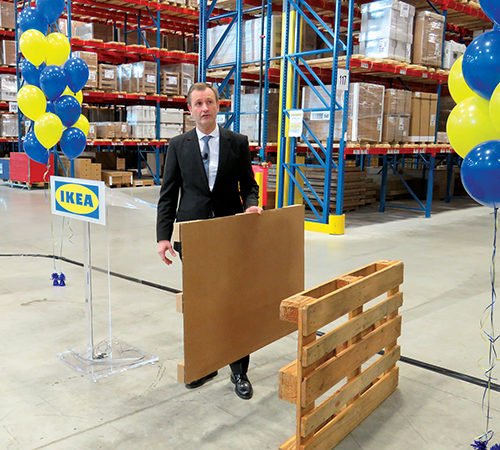 At the opening of IKEA Canada’s new distribution centre in Mississauga, Ontario all the staff were wearing shirts emblazoned with “MFLU”.

No, it’s not a union acronym; it stands for “Multi-Function Logistics Unit”, which is how IKEA is describing its new-style retail DCs. Designed for omni-channel distribution, this one will fulﬁll customer orders from the four Geater Toronto Area retail stores (North York, Etobicoke, Vaughan and Burlington) as well as online orders, and will deliver direct to customer and to the company’s new Pick-Up and Order Point locations.

It reflects how the retailer has expanded into e-commerce, as well as the company’s ambitious expansion plans. By 2025, IKEA plans to double in size in Canada.

At present there are 12 stores with a 13th coming online in Halifax, Nova Scotia in late 2017. Pick-Up and Order Point locations have recently opened in St. Catharines, London, Whitby, Kitchener and Windsor, Ontario, along with one in Quebec City, Quebec.

The pick-up and order format is currently part of a global pilot program, testing the viability of offering pick-up points closer to home for consumers.

The 400,000-square-foot Mississauga DC ofﬁcially opened in March this year, operating but not yet full or completely staffed up. With capacity for 9,000 SKUs and about 200 employees, this DC is the smallest for IKEA in North America by about half. As of early July, the company was still hiring staff for the DC, with 130 positions ﬁlled. 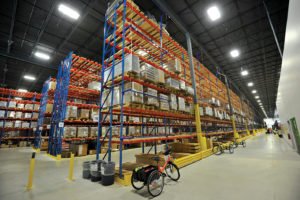 Managers use the
five trikes to make travel through the
DC more efficient.
(Credit: IKEA Canada)

They use three pallet sizes—all paper (see sidebar)—Standard Euro, Half Standard Euro and a Long Pallet (that they refer to as the IKEA Pallet). The racking incorporates riser deck, to allow for the lower-proﬁle paper pallet. It was supplied by Warehouse Solutions Plus, Inc out of Brea, California.

There are also ﬁve tricycles, complete with laptop mounts, for the managers to use getting around the DC efﬁciently, and providing a little light exercise at the same time.

Sixty-two dock doors serve the building, with 23 typically allocated for inbound, and 39 for outbound, but all can be used for either operation. 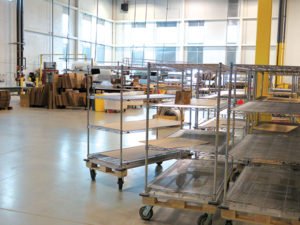 Operating on a 24-hour schedule Sunday through Friday and 16 hours on Saturday, the Mississauga facility picks and packs orders for various types of shipment. Picking locations are on the ﬁrst and second levels of the racking. Picking is conducted either by unique customer order or a group (batch) of customer orders together. This varies depending on the shipping method. The DC ships to delivery hubs in other cities, directly to GTA customers in local home delivery trucks, and smaller parcels go via FedEx.

Picking locations are replenished from overstock locations in the racking, and directly from the inbound dock if needed. The replenishment is order-driven; moves are created to satisfy each day’s order demand.

Replenishment of the facility stock is from two IKEA distribution centres, Brossard, Quebec, and Perryville, Maryland. A limited number of shipments come direct from suppliers. By design, the DC in Brossard continues to perform most of the inbound and outbound planning for the Mississauga location.

The DC’s Warehouse Management System is Astro, supplied by Consafe Logistics. It is the global WMS for IKEA, installed at 39 IKEA distribution sites worldwide. In this case the servers are remote, in New Jersey.

Challenges
As with any DC set-up operation, there are bound to be hurdles.

According to Mark Guarino, expansion support manager with IKEA Distribution Services North America in New Jersey, who was intimately involved with making the Mississauga DC operational, the “primary challenges were based on our own, self-imposed tight timeline.”

The biggest challenge—given the DC received the green light in in early May of 2015 and the ﬁrst receipt at the dock doors was early October that same year—was ﬁnding the right staff.

The short timeline meant, “we were lucky enough to get some experienced IKEA co-workers in most of the key roles, but the stores that they were working at were in the middle of the busiest season of the year for IKEA: the release of a new catalogue,” Guarino recalls. “However, we were successful in sending many of them to Brossard for intensive training, and we had people from Brossard and elsewhere in our network on-site to help get things started.”

Settled in
Now that the DC has been up and running for more than nine months, it appears IKEA has created a healthy operation.

Volumes are steadily increasing as the stores transition their home delivery business to be fulﬁlled from Mississauga. And, Guarino notes, order quality and accuracy goals are being met.

“It’s going very well,” he says. “The team has established a well-running operation. There’s an incredible positive attitude and spirit of cooperation in this facility. The IKEA spirit is alive and well in Mississauga.”

In its drive for sustainable operations, IKEA pursues numerous initiatives in stores and distribution facilities alike.

It was the first Canadian retailer to  phase out plastic bags, it owns wind farms and solar power installations, and has a closed loop for paper products, sourcing only post-consumer recycled toilet paper and paper towel for use in its facilities from cardboard and paper recaptured in its own facilities—including the paper pallets.

In 2008, IKEA made a commitment to phase out wooden pallets across its global distribution network, with the objectives of decreasing costs increasing the sustainability of its operations.

Step one was addressing the flow of goods between IKEA suppliers and IKEA units. This change impacted all functions within the company’s supply chain as well as all stores and suppliers in Europe.

Between 2009 and 2012 the company sourced paper pallets and a system that manages the paper pallets in trucks and on racking, and adapted its retail locations. By 2012 wooden pallets had been phased out for 1,000 suppliers in 51 countries. In 2013 pallets were eliminated from the DC to store product flow.

The paper pallets allow for more dense loading on trucks as well as reducing weight. Paper pallets are recyclable, designed to fit IKEA products and are optimized to fit trucks and containers so that the need to ship bulky wooden pallets back and forth is eliminated. They also eliminate concerns about insect pests being spread through the use of untreated wood pallets.

So far, IKEA estimates that globally, more than 50,000 fewer trucks a year will be on the road, resulting in lower carbon emissions. Switching from wood to paper pallets has reduced the footprint of transporting IKEA products by 75,000 tonnes of CO2 per year.