In defence of simplicity 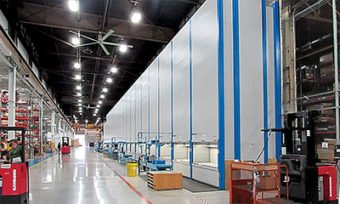 Once the VLM trial was over, HCL went from two of the shuttle units to 21.

Supplying defence contractors with critical equipment and parts has been the challenge for HCL Logistics, Inc, of London, Ontario over the last eight years. Handling about 26,000 SKUs that include everything from tiny washers, to 20-foot-long steel sheets, to complete engines, the company supplies key components its customers use to manufacture land-based military vehicles used by Canadian and allied forces around the world.

In 2012, HCL Logistics found itself in need of a more efficient and streamlined warehouse operation. Intent on improving flexibility, efficiency, and accuracy in its 500,000 square feet of warehouse space, the company shopped around for an automated solution that would help it to achieve those goals.

“We have one major customer in the defence industry that we service, and we had recently won a larger contract that was previously being handled by a different provider,” says Tim Van Holst, president.

“We were using conventional racking systems in our warehouse, and felt that new equipment like narrow-aisle racking and vertical lift modules would help us get to the ‘next level’ with our contracts.”

Searching for a better way
Since inception, HCL Logistics has been providing warehousing, transportation, and just-in-time delivery in a secure defence environment. Like many growing companies, HCL Logistics reached a point where its existing warehouse setup was no longer meeting its needs.

But instead of a piecemeal approach to solving the problem, using a mix of old and new, the company went in search of a strategic, end-to-end material handling solution.

Van Holst says the initiative was driven by the need for better picking efficiency and improved material and people flow on the warehouse floor.

“With the way the warehouse was laid out, we were moving large products (i.e., vehicle engines) long distances for staging and shipping,” he says.

The company also wanted to reduce the number of forklifts on the warehouse floor, improve picking accuracy, and create a more streamlined process overall.

As a starting point, they considered narrow-aisle racking systems that would support the company’s efficiency goals. Working with Brian Rodway of Johnston Equipment, the company also explored material handling and AS/RS options on the market.

During the selection process, Van Holst says the company also had its eye on maximizing its current warehouse space, better utilizing the facility’s vertical space, and installing equipment that could be used to batch multiple orders for different customers.

“We started by integrating narrow-aisle racking and that led to our testing vertical lift modules and then moving to radio shuttles,” he says. “We wanted a complete solution that would integrate these various components into a more streamlined setup.” 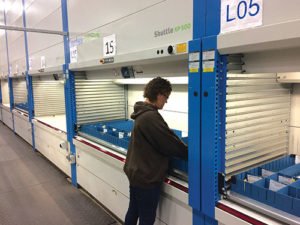 The VLMs operate on the “goods to person” model.

“Once the two units were installed, we used a ‘wait and see’ strategy to see how they would work for us,” says Van Holst, who began to notice positive results soon after installation. Automating a manual picking environment, for example, has made employees 10 times more efficient, while data entry control is nearly perfect.

“Based on the efficiencies and the space savings that we gained [in the trial], we grew the system from two units to 21 VLMs,” Van Holst says.

Combined with a high-density pallet system and narrow-aisle racking, the setup also cut HCL Logistics’s required warehouse space down by about 100,000 square feet. In one section of the facility, for example, the company saved about 30,000 square feet simply by installing the VLMs that now take up just 1,000 square feet of space. 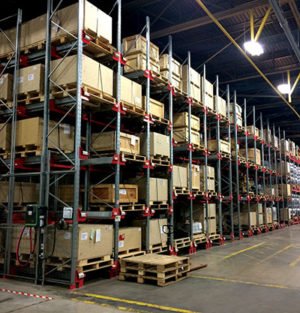 The radio shuttle is located about 30 feet from the receiving area.

To round out its end-to-end solution, HCL Logistics also installed a radio shuttle system that it uses to move large items that once required much navigation and logistical coordination.

“Our radio shuttle is positioned about 30 feet away from our receiving area,” Van Holst notes. “Our larger products now occupy a four-foot by four-foot skid, which equates to about a 50-percent space savings for the area where we store our larger materials.”

More efficient handling
When shopping around for a holistic warehouse solution four years ago, HCL Logistics wanted a platform that would help better manage the small parts it was handling on a day-to-day basis across multiple customers. More specifically, the company wanted to be able to take parts that had to be kept separate while on the shelves and batch them during the picking process.

The company found what it was looking for in Kardex Remstar’s Power Pick Global inventory management software client handling module.

“With fixed, static shelving, you basically dedicate aisles to different customers and then move through the various zones to pick orders—even if the armored vehicle parts are the same across those zones,” Johnston Equipment’s Rodway explains.

“With client handling, HCL Logistics was able to keep each customer’s inventory separate, but not physically separate. That allows them to get the benefits of storage density in their VLMs.”

This capability also helps HCL Logistics expand its customers’ material profiles without the need for additional, physical shelving space. Instead, it can simply define more trays for a specific customer, and within a certain tower.

“It gives them flexibility and agility to grow,” says Rodway, “and makes it much easier to serve multiple customers.”

“Our goals of flexibility, efficiency, and accuracy have been met and exceeded, and we are now well positioned for growth and expansion into new markets,” says Van Holst.

HCL Logistics has also exceeded its picking efficiency goals and is now fulfilling orders much faster than it once did.

“We’ve seen a 15 percent efficiency improvement as a result of the VLMs and the wire guidance system that’s incorporated into them,” Van Holst notes. “For large products, the radio shuttle system has doubled our efficiency in terms of shortening up the amount of driving and material-handling time.”

Other key gains include inventory accuracy improvement—from the previous 98 percent to the current 99.5 percent. Cumulatively, Van Holst estimates that the solution could potentially save the company $3 million a year on adjustments and inventory alone. 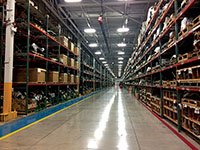 HCL employees are now
working in a cleaner, safer environment.

“It’s not just about the picks, puts, and inventory accuracy,” says Van Holst. “Cycle counts and physical inventory are also much faster now.”
Finally, he says HCL Logistics’ employees are now working in a safer, cleaner, more ergonomic environment and it’s a benefit that can’t be overstated.

“When you’re storing this volume of parts for so long, it’s easy for them to gather dust and for labels to become unreadable,” says Van Holst. “With our new system, the overall cleanliness of the facility has definitely improved.”

Keeping it simple
As he looks around HCL Logistics’s warehouse today, Van Holst is pleased to see that all parts and equipment have their designated “spaces” and that the flow of material through the facility has become more streamlined, organized, and predictable.

To other companies considering a similar, end-to-end approach, he says, “Keep it simple at first and test out the strategy; then grow from there.”

In sticking to this “keep it simple” philosophy, HCL Logistics was also careful not to overcomplicate its new, end-to-end warehouse management strategy. Within its 21 VLMs, for example, it stuck to just a few different bin sizes in order to keep the process manageable—and to make sure it wasn’t wasting any tray space.

“We didn’t want our operators looking through 120 different bins to try and figure out where to put something,” says Van Holst.

“Even though we’re dealing with complex, state-of-the-art AS/RS machines, when it comes to the setup and binning, we kept it as simple as possible and it has paid off for us.”